NASA released this 1st moon photo of Earth on August 23, 1966, via its spacecraft Lunar Orbiter 1. Years later, it used digital technology to restore the photo and reveal more detail. 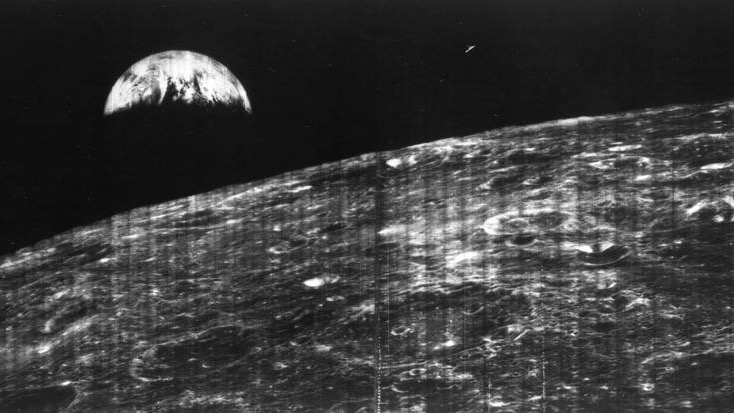 August 23, 1966. This is the anniversary of a historic photo, the first view of Earth from the moon, taken by Lunar Orbiter 1. The photo was shot from a distance of about 236,000 miles (380,000 km) and shows half of Earth, from Istanbul to Cape Town and areas east, shrouded in night.

Lunar Orbiter 1 was one of five Lunar Orbiters sent to the moon in the 1960s by NASA. This particular Lunar Orbiter’s mission was primarily to take photographs in preparation for the manned Apollo mission just three years later. Read about the Lunar Orbiter missions, 1966-1967

Though the photo revealed no detail on Earth’s surface when it was taken in 1966, those on Earth who saw this photo must have been stunned by it.

In 2008, NASA released a newly restored version of the original 1966 image of Earth. Using refurbished machinery and modern digital technology, NASA produced the image at a much higher resolution than was possible when it was originally taken.

You’ll see the restored image below.

First image of Earth from moon, taken via Lunar Orbiter 1 on August 23, 1966, restored in 2008 by NASA, using photographic techniques that were not available when that early spacecraft originally acquired this historic photo. Read more about this photo from NASA.

Bottom line: Photo showing the first view of Earth from the moon, August 23, 1966.