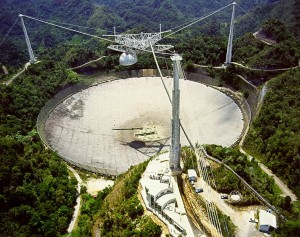 The Arecibo Radio Telescope, at Arecibo, Puerto Rico. At 1000 feet (305 m) across, it is the largest dish antenna in the world. The dish, built into a bowl in the landscape, focuses radio waves from the sky on the feed antenna suspended above it on cables. In 1974, this telescope was used to broadcast the first intentional radio signal into space. Image via Wikimedia Commons.

Thank you! Your submission has been received!
Oops! Something went wrong while submitting the form.
END_OF_DOCUMENT_TOKEN_TO_BE_REPLACED