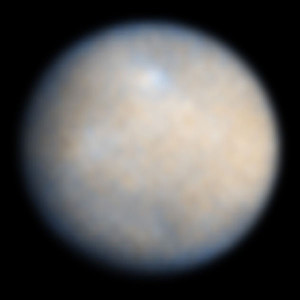 This is a NASA Hubble Space Telescope color image of Ceres, the largest object in the asteroid belt.

Astronomers enhanced the sharpness in these Advanced Camera for Surveys images to bring out features on Ceres’ surface, including brighter and darker regions that could be asteroid impact features. The observations were made in visible and ultraviolet light between December 2003 and January 2004.

The colors represent the differences between relatively red and blue regions. These differences may simply be due to variation on the surface among different types of material.

Ceres’ round shape suggests that its interior is layered like those of terrestrial planets such as Earth. Ceres may have a rocky inner core, an icy mantle, and a thin, dusty outer crust inferred from its density and rotation rate of 9 hours. Ceres is approximately 590 miles (950 kilometers) across and was first discovered in 1801.

Thank you! Your submission has been received!
Oops! Something went wrong while submitting the form.
END_OF_DOCUMENT_TOKEN_TO_BE_REPLACED