Today in science: Breakup of an asteroid

Scientists watched as, over a period of months, the asteroid known as P/2013 R3 broke into smaller pieces. 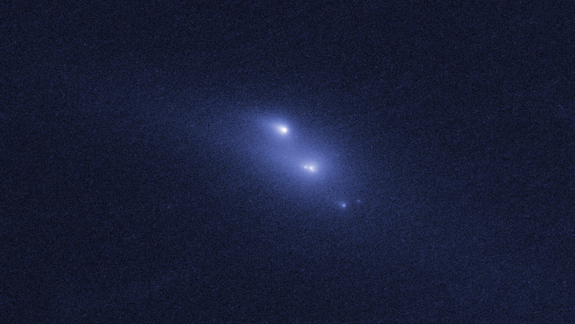 March 6, 2014. On this date, the peer-reviewed Astrophysical Journal Letters first published a study of the breakup of an asteroid. It was the first asteroid ever seen to break up, and, so far, it’s been the only one.

The asteroid had been discovered in September, 2013, in the Catalina and Pan-STARRS sky surveys. It was designated P/2013 R3. Shortly after its discovery, observations by the Keck Telescope in Hawaii showed not one, but three bodies traveling together. They were surrounded by a dusty envelope nearly as wide as the Earth.

More observations by the Hubble Space Telescope – and subsequent computer modeling – showed that P/2013 R3 probably started out less than about a quarter of a mile (400 meters) in radius and probably weighed about 200,000 tons. It broke up into at least 13 pieces, the biggest of which was likely no more than about 600 feet (200 meters) in size.

Fragile icy comet nuclei have been seen to fall apart as they approach the sun. But asteroids are not, by definition, fragile icy bodies. They’re chunks of rock or metal. David Jewitt of UCLA, who led the astronomical investigation, said at the time:

This is a rock. Seeing it fall apart before our eyes is pretty amazing. 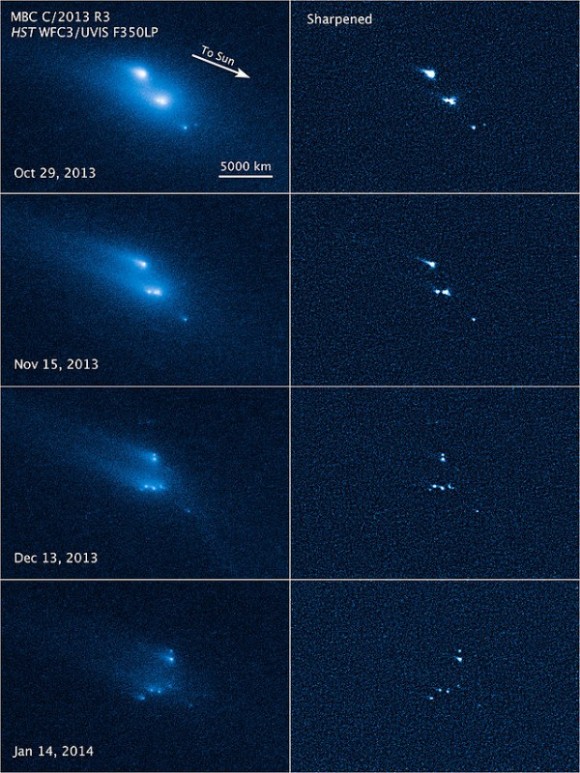 View larger. | This series of Hubble Space Telescope images reveals the breakup of an asteroid over a period of several months starting in late 2013. Image via NASA, ESA, D. Jewitt (UCLA)

Jewitt and the other scientists who studied P/2013 R3 pointed out that, because the asteroid seemed to disintegrate slowly over a period of months, it was unlikely that a violent and sudden collision with another asteroid caused the breakup.

They said it was also unlikely that the asteroid broke apart due to the pressure of interior ices warming and vaporizing, as the asteroid drew near the sun. Icy comets do become active for this reason, and do sometimes disintegrate, but P/2013 R3 was believed to be too cold for such a process, plus it had presumably maintained its nearby distance from the sun (~300 million miles, or ~480 million km) for much of the age of our solar system.

That left a possible scenario in which the asteroid disintegrated due to a subtle effect of sunlight, known as the YORP effect — which would cause the rotation rate to increase slowly over time. Eventually, the component pieces of the asteroid would gently pull apart due to centrifugal force.

For breakup to occur in this way, P/2013 R3 would have needed to have a weak, fractured interior. That fractured interior might have been the result of numerous ancient and non-destructive collisions with other asteroids, early in the solar system’s history. Most small asteroids are thought to have been severely damaged in this way, giving them a “rubble pile” internal structure.

Thus P/2013 R3 itself was probably the product of collisional shattering of a bigger body sometime in the last billion years.

Astronomers have said that most of P/2013 R3’s remnant debris will eventually plunge into the sun. But some will become a rich source for future meteor showers and may even one day cross Earth’s sky as meteors.

View larger. | This illustration shows one possible explanation for the disintegration of asteroid P/2013 R3. It is likely that over the past 4.5 billion years the asteroid was fractured by collisions with other asteroids. The effects of sunlight will have caused the asteroid to slowly increase its rotation rate until the loosely bound fragments drifted apart due to centrifugal forces. Dust drifting off the pieces makes the comet-looking tails. This process may be common for small bodies in the asteroid belt. Image via NASA, ESA, D. Jewitt (UCLA), and A. Feild (STScI).

… this was misinterpreted by many people to mean that the active objects are necessarily icy. In most cases, we don’t know if they are icy. In some cases we know that they are not.

Bottom line: This is the original publication date of the study of the asteroid known as P/2013 R3. It was subsequently found to have broken up into as many as 13 smaller pieces.