This black hole outgrew its galaxy

Astronomers have discovered a gigantic black hole – among the most massive black holes ever found – inside a normal-sized galaxy. 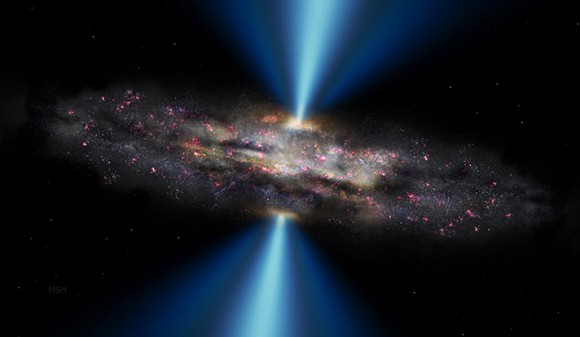 Astronomers have spotted a super-sized black hole in the early universe that grew much faster than its host galaxy.

The discovery runs counter to most observations about black holes, which are massive areas of space with extraordinarily strong gravity that can pull in anything — even light. In most cases, black holes and their host galaxies expand at the same rate.

The study was published in the journal Science on July 10, 2015.

This particular black hole formed in the early universe, roughly two billion years after the Big Bang. The black hole, located in the galaxy CID-947, is among the most massive black holes ever found. It measures nearly 7 billion solar masses (a solar mass is equivalent to the mass of our sun).

However, it was the mass of the surrounding galaxy that most surprised the research team. Benny Trakhtenbrot, a researcher at ETH Zurich’s Institute for Astronomy, is the study lead author. He said:

The measurements correspond to the mass of a typical galaxy. We therefore have a gigantic black hole within a normal-size galaxy.

Most galaxies, including our own Milky Way, have a black hole at their center, holding millions to billions of solar masses. Not only does the new study challenge previous notions about the way host galaxies grow in relation to black holes, it also challenges earlier suggestions that the radiation emitted by expanding black holes curtails the creation of stars.

Stars were still forming in CID-947, the researchers said, and the galaxy could continue to grow. They said CID-947 could be a precursor of the most extreme, massive systems observed in today’s local universe, such as the galaxy NGC 1277 in the Perseus constellation, 220 million light years from the Milky Way. But if so, they said, the growth of the black hole still greatly anticipated the growth of the surrounding galaxy, contrary to what astronomers thought previously.

Bottom line: An international research team has discovered a super-sized black hole in the early universe inside a normal-sized galaxy.