The water in your bottle might be older than the sun

Up to half of the water on Earth and throughout our solar system likely originated as ices that formed in interstellar space. 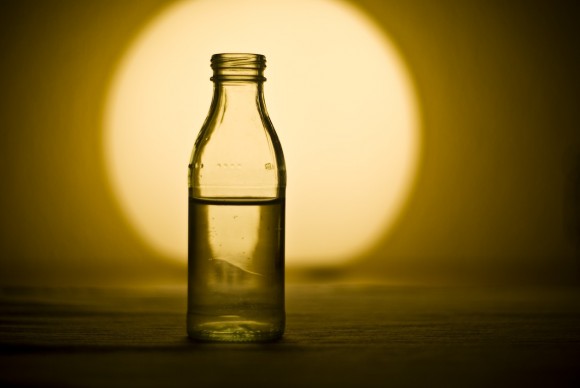 A new study in the journal Science, published September 26, 2014, suggests that much of the water on Earth and throughout our solar system likely originated as ices that formed in interstellar space. If so, it means that water may be more widespread in planetary systems than previously thought.

The researchers’ work addresses a debate about just how far back in galactic history our planet and our solar system’s water formed. Were the molecules in comet ices and terrestrial oceans born with the system itself—in the planet-forming disk of dust and gas that circled the young sun 4.6 billion years ago? Or did the water originate even earlier, in the cold, ancient molecular cloud that spawned the sun and that planet-forming disk?

The new research suggests that between 30 and 50 percent came from a molecular cloud. That would make it roughly a million years older than the solar system. 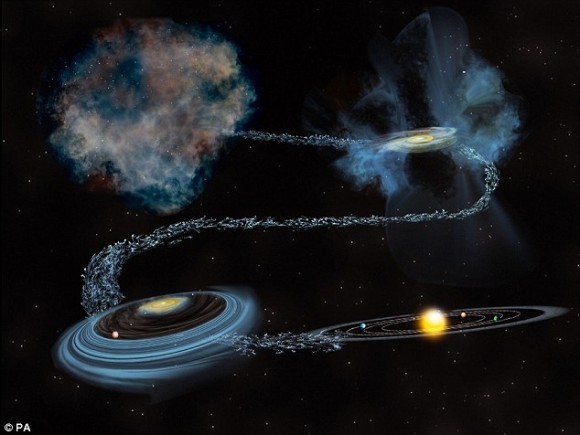 Artist’s concept showing the time sequence of water ice, starting in the sun’s parent molecular cloud, traveling through the stages of star formation, and eventually being incorporated into the planetary system itself. Image credit: Bill Saxton/NSF/AUI/NRAO

To arrive at that estimate, the team – led by L. Ilsedore Cleeves from the University of Michigan – utilized a known ratio between two slightly different varieties of water – the common kind and a heavier version, made with a chemical element known as heavy hydrogen, or deuterium. It’s a long-time mystery in astronomy that, today, comets and Earth’s oceans hold particular ratios of heavy water — mysteriously higher ratios than our sun contains. Where did the heavy water come from?

The difference in the masses of ordinary water and heavy water lead to subtle differences in their behavior during chemical reactions. These differences can help tell scientists about the conditions under which the molecules formed. Cleeves and her colleagues constructed a detailed model of the chemical processes creating water in a protoplanetary (planet-forming) disk, like that from which our Earth and solar system was born. They found that they could not account for the amount of deuterium in Earth’s oceans or in comets via the processes in the planet-forming disk. They conclude that water on Earth must have come from interstellar space. Get more details about the study in this great post in Science.

All life on Earth depends on water. Understanding when Earth’s water came to be – and where it came from – can help scientists estimate how common water might be throughout the galaxy. Conel Alexander of the Carnegie Institution of Science is a member of the research team. He said:

Our findings show that a significant fraction of our solar system’s water, the most-fundamental ingredient to fostering life, is older than the sun, which indicates that abundant, organic-rich interstellar ices should probably be found in all young planetary systems.

Via University of Michigan.