Get ready for the spectacular conjunction of the sky’s two brightest nighttime objects – the moon and Venus – on Wednesday morning, February 26.

Morning after morning now, the waning crescent moon is approaching the planet Venus in the eastern, predawn sky. The two will meet on Wednesday, February 26 with spectacular views from around the world. Don’t miss this wonderful sky event, one of the best for 2014!

As seen from Europe, for example, Venus and the moon will appear separated on the sky’s dome on Wednesday by about half the moon’s diameter. These two brilliant beauties are climbing over the eastern horizon in the predawn darkness now. Watch for them Tuesday morning, as well as Wednesday morning.

They’ll be impossible to miss in the east before dawn, as nighttime’s two brightest objects. They’ll continue to light up the morning twilight until after all stars have been washed from the sky. Sharp-sighted people might even see the moon and Venus after sunrise. 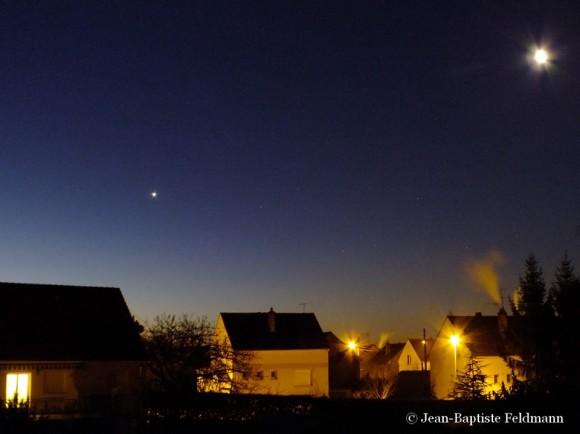 This image is from January 24, from EarthSky Facebook friend Jean-Baptiste Feldmann Photographies.

Photo of the waning crescent moon and the planet Venus, shortly before the moon occulted Venus on April 22, 2009. Image credit: Raymond Shobe

Elsewhere – for example, in India and Southeast Asia – it’ll be possible to watch this lunar occultation of Venus during the daylight hours on February 26. Where this occultation is visible, Venus will disappear behind the illuminated part of the moon and then will reappear on the dark side.

Outside the occultation area, the moon will pass either north of south of Venus. It’ll be beautiful!

If you get a good photo, be sure to post it on EarthSky Facebook, or at our photo community on Google+.

Bottom line: The moon and Venus are the sky’s two brightest nighttime objects, and they’ll appear close together in the eastern, predawn sky on Wednesday morning, February 26.