The Helix Nebula glows like a giant golden eye in the sky in this new infrared image.

The Helix Nebula glows like a giant golden eye in the sky in this image, released today (January 19, 2012) by the European Southern Observatory (ESO). This picture, taken in infrared light, reveals strands of cold nebular gas that are invisible in images taken in visible light, and brings to light a rich background of stars and galaxies. The picture was captured by ESO’s VISTA telescope, at the Paranal Observatory in Chile. 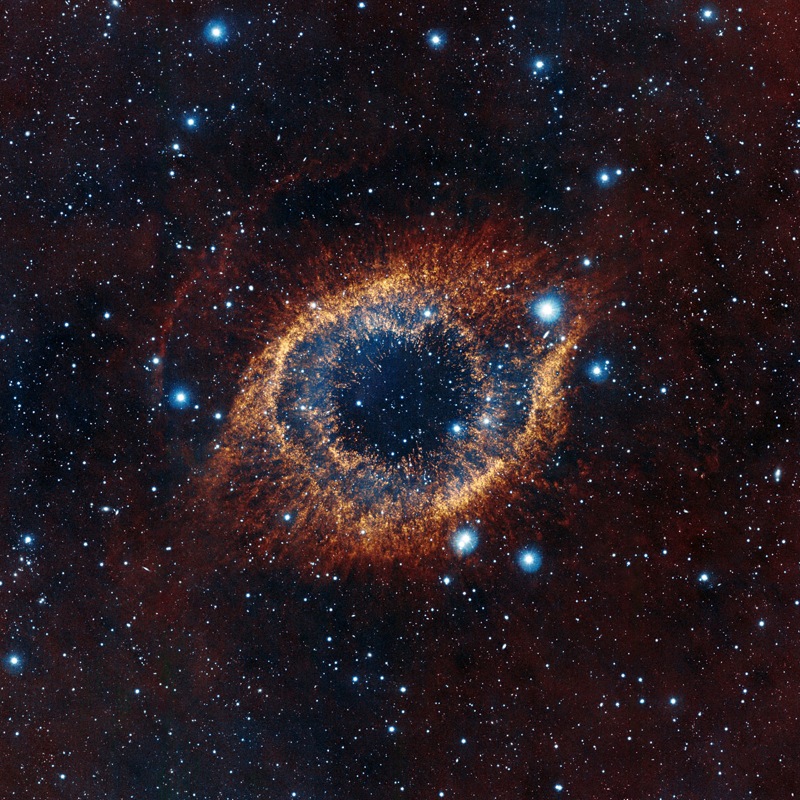 The Helix Nebula is one of the closest and most remarkable examples of a planetary nebula. (Planetary nebulae have nothing to do with planets. The name arose because many of them show small bright discs and resemble the outer planets in the solar system, such as Uranus and Neptune.) The Helix Nebula lies in the constellation of Aquarius, about 700 light-years away from Earth. This strange object formed when a star like the sun was in the final stages of its life. Unable to hold onto its outer layers, the star slowly shed shells of gas that became the nebula, before becoming a white dwarf, the tiny blue dot seen at the centre of the image. 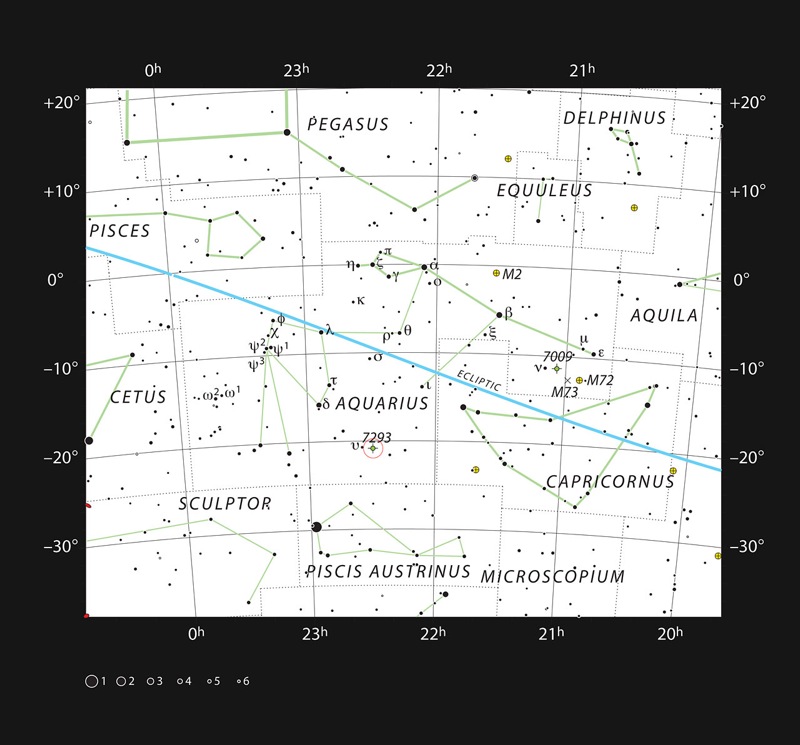 This chart shows the location of the Helix Nebula within the constellation of Aquarius. This map shows most of the stars visible to the unaided eye under good conditions and the nebula itself is marked with a red circle. This nebula is large but very faint and can be seen with binoculars or a small telescope only when the sky is exceptionally dark and clear. Image Credit: ESO, IAU and Sky & Telescope

The nebula itself is a complex object composed of dust, ionized material as well as molecular gas, arrayed in a beautiful and intricate flower-like pattern and glowing in the fierce glare of ultraviolet light from the central white dwarf star.

The main ring of the Helix is about two light-years across, roughly half the distance between the sun and the nearest star. However, material from the nebula spreads out from the star to at least four light-years. This is particularly clear in this infrared view since red molecular gas can be seen across much of the image.

While hard to see visually, the glow from the thinly spread gas is easily captured by VISTA’s special detectors, which are very sensitive to infrared light. The 4.1-metre telescope is also able to detect an impressive array of background stars and galaxies.

This comparison shows a new view of the Helix Nebula acquired with the VISTA telescope in infrared light (left) and the more familiar view in visible light from the MPG/ESO 2.2-metre telescope (right). The infrared vision of VISTA reveals strands of cold nebular gas that are mostly obscured in visible light images of the Helix. Image Credit: ESO/VISTA/J. Emerson. Acknowledgment: Cambridge Astronomical Survey Unit

Bottom line: A new infrared image of the Helix Nebula, captured by ESO’s VISTA telescope at the Paranal Observatory in Chile, was released January 19, 2012. The picture reveals strands of cold nebular gas that are invisible in images taken in visible light, and brings to light a rich background of stars and galaxies.