The Cheshire Cat group of galaxies

A lot of dark matter lies between us and these distant galaxies. Light distortion from gravitational lensing creates the “cat.” 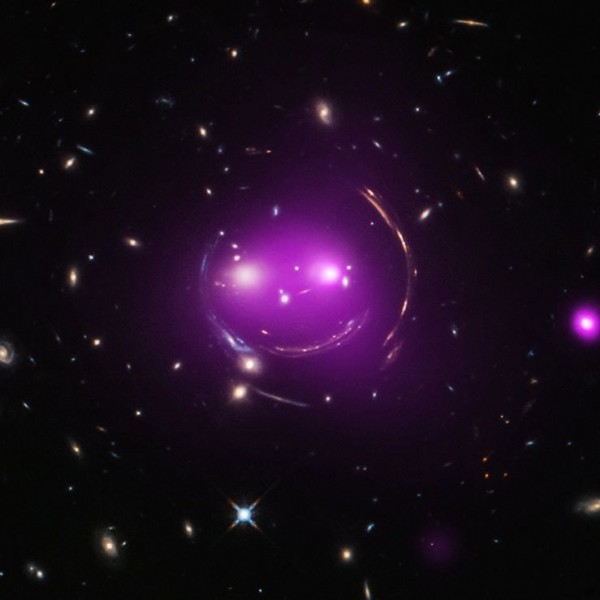 A composite image – combining x-ray and optical images – of the Cheshire Cat group of galaxies. Optical image from from NASA’s Hubble Space Telescope and x-ray images from Chandra X-Ray Observatory.

The Chandra X-Ray Observatory released this image on November 23, 2015. It’s a group of galaxies nicknamed the Cheshire Cat. Some of the features of the “cat” are distant galaxies, whose light has been stretched and bent by gravitational lensing. That’s an indication of large amounts of mass between us and these distant galaxy, and, Chandra says, most of that mass exists in the form of dark matter. According to a Chandra statement about the Cheshire Cat group of galaxies:

…the mass that distorts the faraway galactic light is found surrounding the two giant ‘eye’ galaxies and a ‘nose’ galaxy. The multiple arcs of the circular ‘face’ arise from gravitational lensing of four different background galaxies well behind the ‘eye’ galaxies.

Chandra also said that that its x-ray observations show that that the two eyes of the cat – and the smaller galaxies associated with them – are slamming into one another in a colossal collision between galaxies:

Each ‘eye’ galaxy is the brightest member of its own group of galaxies and these two groups are racing toward one another at over 300,000 miles [nearly 500,000 km] per hour. Data from NASA’s Chandra X-ray Observatory (purple) show hot gas that has been heated to millions of degrees, which is evidence that the galaxy groups are slamming into one another. Chandra’s X-ray data also reveal that the left ‘eye’ of the Cheshire Cat group contains an actively feeding supermassive black hole at the center of the galaxy.

The Cheshire Cat group might be a fossil galaxy group in the making. That is, it might be a gathering of galaxies that contains one giant elliptical galaxy and other much smaller, fainter galaxies. Astronomers believe that fossil galaxy groups may represent a temporary stage that nearly all galaxy groups pass through at some point in their evolution. So of course they want to study them, and the Cheshire Cat is a first opportunity to study one in the process of forming.

Astronomers estimate that the two eyes of the cat will merge in about a billion years, leaving one very large galaxy and dozens of much smaller ones in a combined group.

At that point, the Cheshire Cat appearance of this group will have disappeared, and the grouping will be a fossil group. 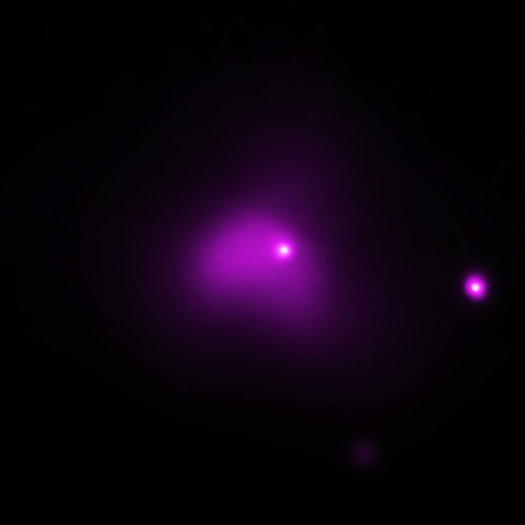 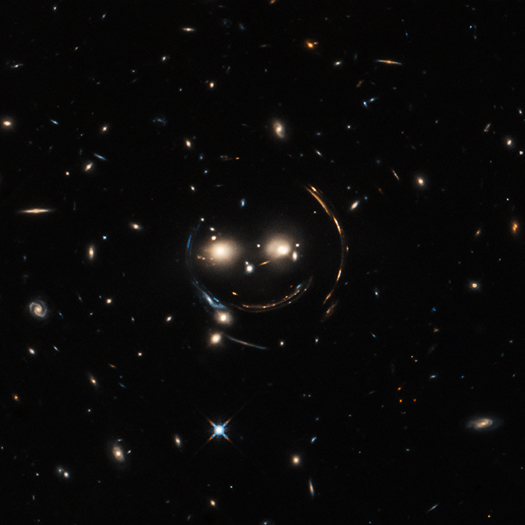 Bottom line: A composite image of the Cheshire Cat galaxy group. The features of the “cat” result from the distortion of light via gravitational lensing, causing by large amount of mass – much of it in the form of dark matter – between us and these distant galaxies.