Scientists test a device on an Alaska glacier that could be used to explore an icy moon of Jupiter.

This article is republished with permission from a brand new and cool website GlacierHub. The post is by Nick Smith.

Mars rovers have been tested in Death Valley and Peru. Apollo astronauts used Meteor Crater in Arizona to simulate walking on the moon. Now glaciers have their part to play as stand-ins for outer space.

The Jupiter’s icy moon Europa is the destination, Alaska’s Matanuska glacier is the training ground. Scientists think that an ocean of liquid water exists below Europa’s ice-covered surface. To practice getting to it, NASA researchers are testing a robotic probe called VALKYRIE that can use a laser-powered drill to bore down into the Alaskan glacier.

A separate group of researchers (this time from NASA’s Jet Propulsion Laboratory) is working on a rover that can swim around underneath the ice. Like the VALKYRIE team, the ice rover is also doing its testing in Alaska.

What’s at stake for projects like these might turn out to be the greatest scientific discovery yet: life outside of earth.

Recently, President Obama requested $15 million to begin developing a mission to Europa for NASA’s 2015 budget. Last month, NASA issued proposals for science equipment on the eventual Europa probe, though it remains to be seen if either the laser drill or the ice rover will make the cut. The mission is tentatively scheduled for the mid-2020s. The European Space Agency is also planning a flyby mission, which will be expected to launch in 2022.

When the two NASA Viking probes landed on Mars in the 1970s, one of the primary mission goals was to search for life outside of Earth. When none was found, attention slowly shifted to Europa, the smallest of Jupiter’s four Galilean moons, as the likeliest source of extraterrestrial life in the solar system.

Europa’s relatively smooth, icy surface is marked by thousands of reddish-brown scratches, as if someone dragged a rusty fork across a cue ball. Many scientists believe a giant ocean exists just below the ice, made warmer by the tidal pull from Jupiter, which creates friction that generates ice-melting heat. In these relatively temperate waters, alien creatures might be swimming. Life on Europa has been the speculation of science fiction for decades, from Arthur C. Clarke’s 1987 novel 2061: Odyssey Three to the more recent movie Europa Report.

Both the NASA and the ESA missions will try to prove whether or not there is an ocean beneath the surface. Europa does emit water vapor plumes frequently in the same manner that geysers on Earth do. If the ocean turns out to exist, it would contain twice as much water as Earth’s oceans, according to the NASA website. 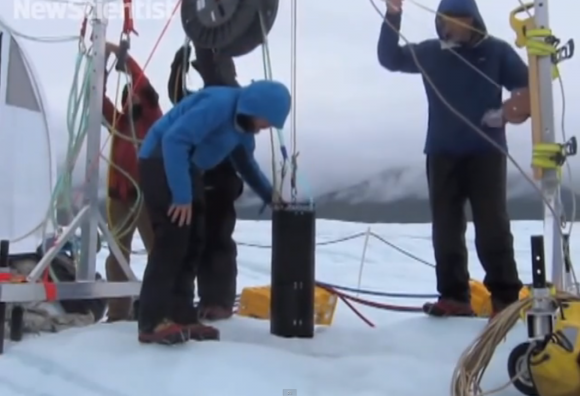 Scientists lower the VALKYRIE robot into the Alaska’s Matanuska glacier. Something similar might be used to drill through Europa’s thick ice. Photo credit: Lisa Grossman/New Scientist

Most scientists and researchers agree that while Mars may have once supported life, Europa may support life right now. Whatever the eventual missions find near Jupiter, there will be a need to run tests on our planet’s own glaciers, conveniently located only a few thousand miles from NASA’s headquarters.