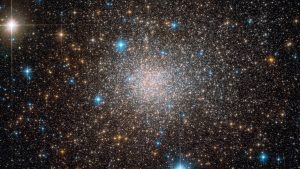 https://www.spacetelescope.org/images/heic1617a/
Peering through the thick dust clouds of the galactic bulge an international team of astronomers has revealed the unusual mix of stars in the stellar cluster known as Terzan 5. The new results indicate that Terzan 5 is in fact one of the bulge’s primordial building blocks, most likely the relic of the very early days of the Milky Way. Observations were made with the Wide Field Camera 3 (WFC3) on board the Hubble, the Multi-conjugate Adaptive Optics Demonstrator (MAD) instrument on ESO’s Very Large Telescope and the second generation Near Infrared Camera at the Keck Telescope. Via NASA/ESA/Hubble/F. Ferraro.

Thank you! Your submission has been received!
Oops! Something went wrong while submitting the form.
END_OF_DOCUMENT_TOKEN_TO_BE_REPLACED