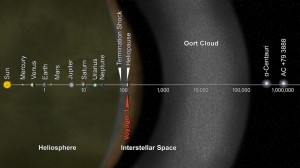 This artist’s concept puts solar system distances in perspective. The scale bar is in astronomical units, with each set distance beyond 1 AU representing 10 times the previous distance. One AU is the distance from the sun to the Earth, which is about 93 million miles or 150 million kilometers. Neptune, the most distant planet from the sun, is about 30 AU.

NASA’s Voyager 1, humankind’s most distant spacecraft, is around 125 AU.

Thank you! Your submission has been received!
Oops! Something went wrong while submitting the form.
END_OF_DOCUMENT_TOKEN_TO_BE_REPLACED