Temperatures in Mars’ atmosphere rise and fall twice a day

Temperatures swing by as much as 58 degrees Fahrenheit (32 kelvins) in this odd, twice-a-day pattern on the planet Mars.

Researchers using NASA’s Mars Reconnaissance Orbiter have found that temperatures in the Martian atmosphere regularly rise and fall not just once each day, but twice.

Temperatures swing by as much as 58 degrees Fahrenheit (32 kelvins) in this odd, twice-a-day pattern, as detected by the orbiter’s Mars Climate Sounder instrument. 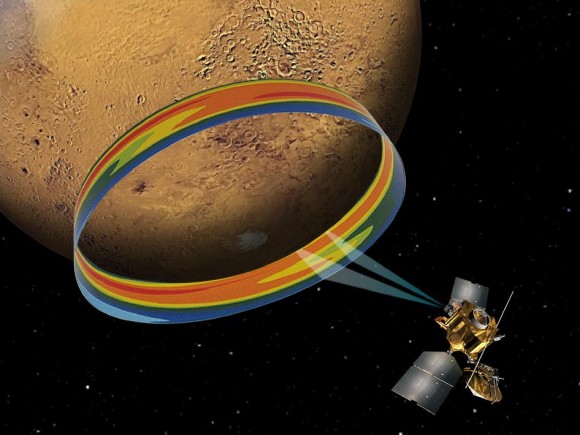 This graphic depicts the Mars Climate Sounder instrument on NASA’s Mars Reconnaissance Orbiter measuring the temperature of a cross section of the Martian atmosphere as the orbiter passes above the south polar region. Click here to reach more about this illustration.

The new set of Mars Climate Sounder observations sampled a range of times of day and night all over Mars. The observations found that the pattern is dominant globally and year-round. The report is being published in the journal Geophysical Research Letters.

Global oscillations of wind, temperature and pressure repeating each day or fraction of a day are called atmospheric tides. In contrast to ocean tides, they are driven by variation in heating between day and night. Earth has atmospheric tides, too, but the ones on Earth produce little temperature difference in the lower atmosphere away from the ground. On Mars, which has only about one percent as much atmosphere as Earth, they dominate short-term temperature variations throughout the atmosphere.

Tides that go up and down once per day are called “diurnal.” The twice-a-day ones are called “semi-diurnal.” The semi-diurnal pattern on Mars was first seen in the 1970s, but until now it had been thought to appear just in dusty seasons, related to sunlight warming dust in the atmosphere.

“We were surprised to find this strong twice-a-day structure in the temperatures of the non-dusty Mars atmosphere,” Kleinboehl said. “While the diurnal tide as a dominant temperature response to the day-night cycle of solar heating on Mars has been known for decades, the discovery of a persistent semi-diurnal response even outside of major dust storms was quite unexpected, and caused us to wonder what drove this response.”

He and his four co-authors found the answer in the water-ice clouds of Mars. The Martian atmosphere has water-ice clouds for most of the year. Clouds in the equatorial region between about 6 to 19 miles (10 to 30 kilometers) above the surface of Mars absorb infrared light emitted from the surface during daytime. These are relatively transparent clouds, like thin cirrus clouds on Earth. Still, the absorption by these clouds is enough to heat the middle atmosphere each day. The observed semi-diurnal temperature pattern, with its maximum temperature swings occurring away from the tropics, was also unexpected, but has been replicated in Mars climate models when the radiative effects of water-ice clouds are included.

“We think of Mars as a cold and dry world with little water, but there is actually more water vapor in the Martian atmosphere than in the upper layers of Earth’s atmosphere,” Kleinboehl said. “Water-ice clouds have been known to form in regions of cold temperatures, but the feedback of these clouds on the Mars temperature structure had not been appreciated. We know now that we will have to consider the cloud structure if we want to understand the Martian atmosphere. This is comparable to scientific studies concerning Earth’s atmosphere, where we have to better understand clouds to estimate their influence on climate.”

JPL, a division of the California Institute of Technology in Pasadena, provided the Mars Climate Sounder instrument and manages the Mars Reconnaissance Orbiter project for NASA’s Science Mission Directorate, Washington.

For more about the Mars Reconnaissance Orbiter, visit: https://www.nasa.gov/mro .