A jet of swirling, cool, dense gas in the center of a galaxy – 70 million light-years from Earth – gives new clues to how supermassive black holes grow. 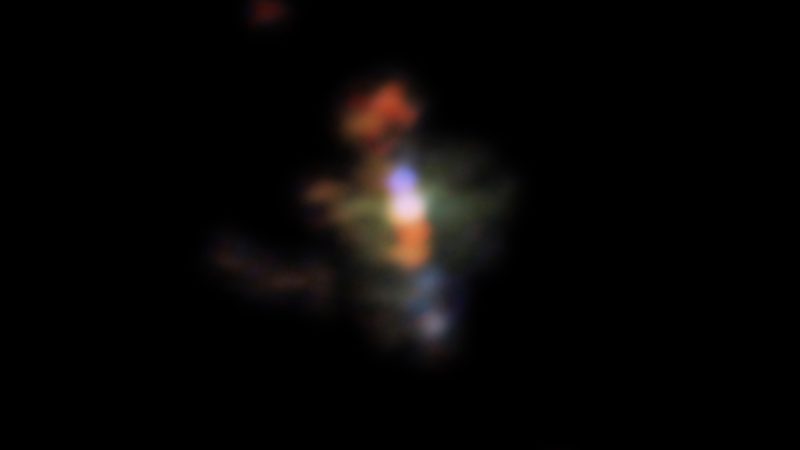 Close-up view of center of galaxy NGC 1377. In this color-coded image, reddish gas clouds are moving away from us, bluish clouds towards us, relative to the galaxy’s center. Image shows light with wavelength around one millimeter from molecules of carbon monoxide (CO). Via ALMA/ESO/NRAO/S. Aalto & F. Costagliola.

Astronomers have used the ALMA telescope in Chile to observe a remarkable structure in the center of the galaxy NGC 1377, located 70 million light-years from Earth in the direction to the constellation Eridanus the River. The jet, with its unusual, swirling structure, gives new clues to how supermassive black holes grow. The results are presented in a paper published in the June 2016 issue of the journal Astronomy and Astrophysics.

Susanne Aalto, professor of radio astronomy at Chalmers University of Technology in Sweden, led the team. She said:

We were curious about this galaxy because of its bright, dust-enshrouded center. What we weren’t expecting was this: a long, narrow jet streaming out from the galaxy nucleus. 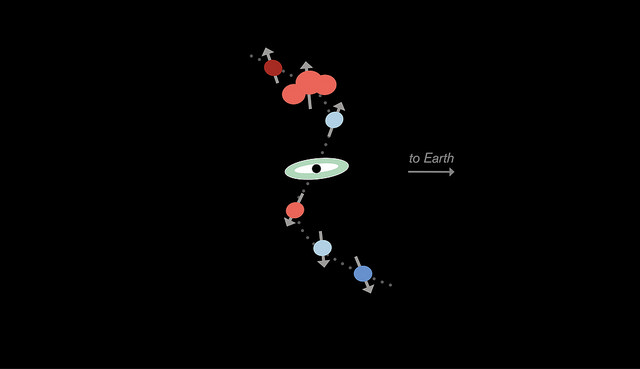 These astronomers said the jet is 500 light-years long and less than 60 light-years across and that the material within it travels at speeds of at least 500 thousand miles per hour (800 thousand km per hour). Supermassive black holes are commonly found in the centers of galaxies (including our Milky Way). They have masses of between a few million to a billion solar masses. Astronomers see signs of them in directly, sometimes from the matter that may be falling into them, but don’t know how such monster black holes came to be.

Black holes that are still swallowing matter (and these tend to be the distant black holes, which we see in the early universe) often have jets of fast-moving material emanating from them. Such jets are an indication that a black hole is still growing. But the jet seen from the supermassive black hole in galaxy NGC 1377 is different. Francesco Costagliola, co-author on the paper, explained:

The jets we usually see emerging from galaxy nuclei are very narrow tubes of hot plasma. This jet is very different. Instead it’s extremely cool, and its light comes from dense gas composed of molecules.

The jet has ejected molecular gas equivalent to two million times the mass of the sun over a period of only around half a million years — a very short time in the life of a galaxy.

The astronomers said that, during this short and dramatic phase in the galaxy’s evolution, its central, supermassive black hole must have grown fast. Team member Jay Gallagher said:

Black holes that cause powerful narrow jets can grow slowly by accreting hot plasma. The black hole in NGC 1377, on the other hand, is on a diet of cold gas and dust, and can therefore grow — at least for now — at a much faster rate.

The motion of the gas in the jet also surprised the astronomers. The measurements with ALMA are consistent with a jet that is precessing — swirling outwards like water from a garden sprinkler. Sebastien Muller, another member of the team, said:

The jet’s unusual swirling could be due to an uneven flow of gas towards the central black hole. Another possibility is that the galaxy’s center contains two supermassive black holes in orbit around each other.

In NGC 1377, we’re witnessing a transient stage in a galaxy’s evolution which will help us understand the most rapid and important growth phases of supermassive black holes, and the life cycle of galaxies in the universe. 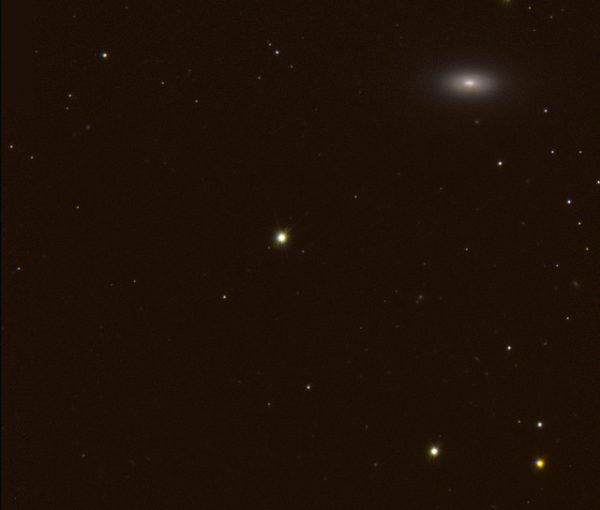 Here’s the same galaxy as above, NGC 1377, seen as a color composite in visible light. Image via CTIO/H. Roussel et al./ESO / Onsala rymdobservatorium.

Bottom line: Astronomers used the ALMA telescope to observe a remarkable structure in the center of the galaxy NGC 1377. It’s a jet of swirling, cool dense gas, thought to extend from one or two supermassive black holes at the galaxy’s center.