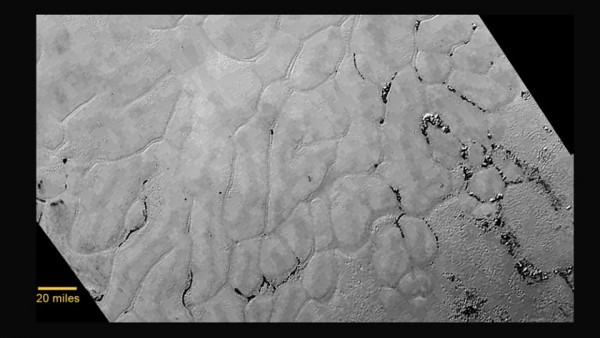 NASA’s New Horizons spacecraft acquired this image on July 14, when it was nearly at its closest to Pluto, only 48,000 miles (77,000 kilometers) away. The image shows features as small as one-half mile (1 kilometer) across. Image via NASA/JHUAPL/SWRI

The latest data received from NASA’s New Horizons spacecraft – which swept past the dwarf planet Pluto on July 14, 2015 – has revealed a vast, craterless plain that appears to be no more than 100 million years old. How do we know? All the worlds in our solar system underwent a heavy bombardment by debris early in the solar systems history, billions of years ago. A craterless terrain on any world – for example, on Earth – is assumed to be a young terrain. In other words – again using Earth as an example – geologic activity has wiped most of the original craters from view.

The fact that this part of Pluto is craterless means that something is happening here. Scientists naturally suspect some form of geologic activity, but they don’t yet know what sort of activity that might be.

This terrain is not easy to explain. The discovery of vast, craterless, very young plains on Pluto exceeds all pre-flyby expectations.

This frozen region is north of Pluto’s icy mountains and lies to the center-left of the famous heart feature on Pluto. Pluto’s heart, by the way, has informally been named named Tombaugh Regio (Tombaugh Region) to honor Clyde Tombaugh, who discovered Pluto in 1930. The image below shows the now-famous heart on Pluto, and the video below that shows the location of the frozen plains on Pluto within the heart region: 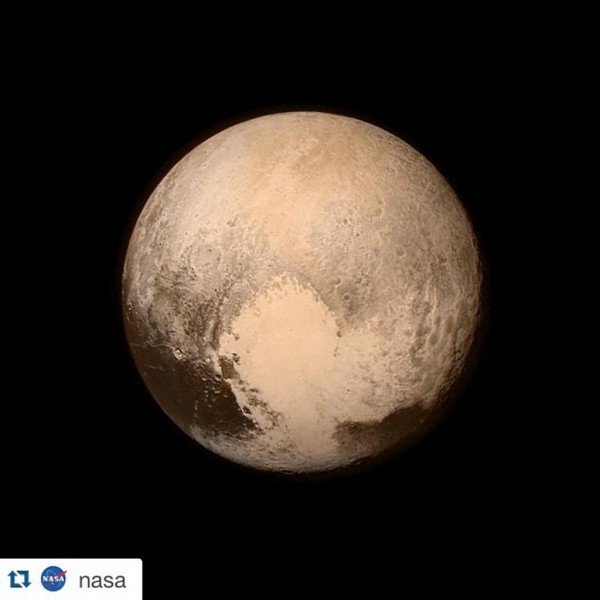 The region has a broken surface of irregularly-shaped segments, roughly 12 miles (20 km) across, bordered by what appear to be shallow troughs. Some of these troughs have darker material within them, while others are traced by clumps of hills that appear to rise above the surrounding terrain.

Elsewhere, the surface appears to be etched by fields of small pits that may have formed by a process called sublimation, in which ice turns directly from solid to gas, just as dry ice does on Earth.

Scientists have two working theories as to how these segments were formed. The irregular shapes may be the result of the contraction of surface materials, similar to what happens when mud dries. Alternatively, they may be a product of convection, similar to wax rising in a lava lamp. On Pluto, convection would occur within a surface layer of frozen carbon monoxide, methane and nitrogen, driven by the scant warmth of Pluto’s interior.

Pluto’s icy plains also display dark streaks that are a few miles long. These streaks appear to be aligned in the same direction and may have been produced by winds blowing across the frozen surface.

Mission scientists say they’ll learn more about these mysterious terrains from higher-resolution and stereo images that New Horizons will pull from its digital recorders and send back to Earth during the coming year. 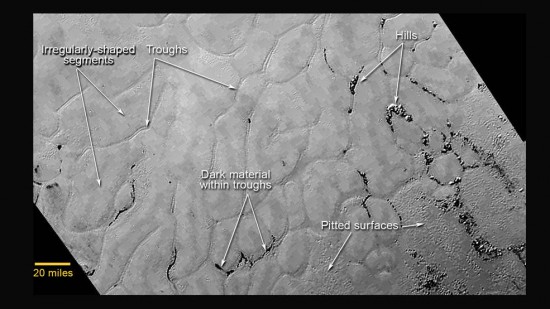 View larger. | This annotated view of a portion of Pluto’s newly named Sputnik Planum shows an array of enigmatic features. The surface appears to be divided into irregularly shaped segments that are ringed by narrow troughs, some of which contain darker materials. Features that appear to be groups of mounds and fields of small pits are also visible. July 14 New Horizons image from a distance of 48,000 miles (77,000 kilometers). The blocky appearance of some features is due to compression of the image. Via NASA/JHUAPL/SWRI