Harvard astronomers want to examine the radio waves from supersonic stars at the Milky Way’s core, to learn more about this hidden region of space. 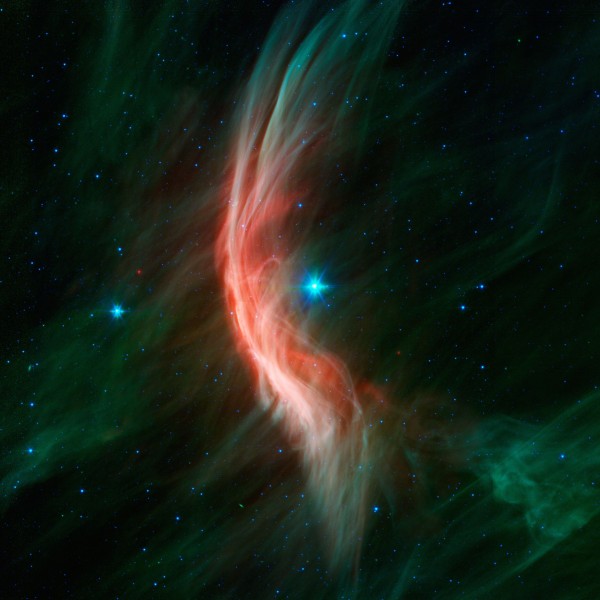 Supersonic star Zeta Ophiuchi. Stellar winds from this star create a bow shock in space, visible here in infrared light via the Spitzer Space Telescope. Supersonic stars like this one, in the heart of our Milky Way, might let astronomers probe the inner Milky Way. Image via NASA/JPL-Caltech.

Our home galaxy, the Milky Way, surrounds us in space. From the Northern Hemisphere, we look toward the galaxy’s center on late summer evenings. We look toward it, but not into it. We can’t see directly into the heart of the galaxy in visible light, because intervening interstellar dust blocks our view. This week (September 22, 2015), astronomers at the Harvard-Smithsonian Center for Astrophysics announced a possible new technique for peering into the hidden heart of our Milky Way. They want to use radio waves from supersonic stars, stars traveling through space faster than the speed of sound.

The Spitzer Space Telescope image above shows a supersonic star that’s relatively close to us in space. It’s the star Zeta in the constellation Ophiuchus the Serpent Bearer, only about 370 light-years away. Zeta Ophiuchi is six times hotter, eight times wider, 20 times more massive, and about 80,000 times as bright as our sun. NASA said this star:

… is traveling at a snappy pace of about 54,000 mph (24 km per second), fast enough to break the sound barrier in the surrounding interstellar material. Because of this motion, it creates a spectacular bow shock ahead of its direction of travel (to the left). The structure is analogous to the ripples that precede the bow of a ship as it moves through the water, or the sonic boom of an airplane hitting supersonic speeds.

Supersonic stars like Zeta Ophiuchi produce radio waves. They do this when their preceding bow shock collides with tenuous clouds of interstellar gas and dust in space. The collision causes electrons – subatomic particles found in all atoms – to accelerate, and the acceleration produces radio waves via a process called synchrotron radiation.

Now shift the scene to the center of our Milky Way galaxy, some 26,000 light-years away. There, the Harvard astronomers say, stars are influenced by the strong gravity of our galaxy’s central supermassive black hole. The astronomers point out that:

When an orbiting star reaches its closest approach to the black hole, it can easily acquire the required [supersonic] speed.

And what is that speed? One of the researchers, Idan Ginsburg of Harvard, said in an email to EarthSky:

Will it work? The researchers say they will test the technique, using a particular star at the galactic center. This hot, bright star is called S2 by astronomers. It can be seen in the infrared despite all the dust. When closest to the galactic center, S2 is moving over 10 million miles per hour! It’ll make its closest approach to the galactic center in late 2017 or early 2018. When it does, radio astronomers will target it to look for radio emission from its shock wave. Harvard astronomer Avi Loeb commented:

S2 will be our litmus test. If it’s seen in the radio, then potentially we can use this method to find smaller and fainter stars – stars that can’t be seen any other way.

Bottom line: Astronomers at the Harvard-Smithsonian Center for Astrophysics announced that they have a new technique for peering into the hidden heart of our Milky Way galaxy. They want to examine radio waves from supersonic stars, stars traveling through interstellar space faster than the speed of sound, at the galaxy’s core.