We live in a universe that loves extremes. 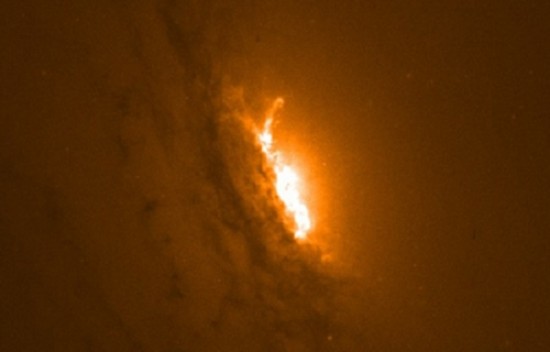 Hubble Space Telescope image of central region of galaxy IC5063. Here, jets driven by a supermassive black hole are blasting material out of the galaxy. Photo via NASA and U. of Sheffield.

Astronomers at University of Sheffield say they’ve solved a long-standing mystery in astronomy, related to the way galaxies evolve. They say their new insights deepen our understanding of the future of our own Milky Way galaxy. Using the ESO Very Large Telescope in Chile, they’ve found that the molecular hydrogen gas in the relatively nearby galaxy IC5063 is moving at extraordinary speeds – 1 million kilometers per hour – at the galaxy’s center. A supermassive black hole at the center of this galaxy is thought to be driving this outflowing gas. The work is published online in the July 6, 2014 issue of the journal Nature.

It relates to galaxy evolution because the gas being expelled is cold gas, which is required to form new stars. When galaxies expel gas in this way, the rate of star formation may become limited, inhibiting the galaxy’s evolution. All of this has been part of astronomical knowledge for some time, with outflows of gas from the centers of galaxies acting a key ingredient in theoretical models of the evolution of galaxies. The mystery has surrounded how the gas is accelerated.

This new study provides the first direct evidence that the molecular outflows are accelerated by energetic jets of electrons that are moving at close to the speed of light. Such jets are propelled by the central supermassive black holes. Clive Tadhunter, who led the research, said:

Much of the gas in the outflows is in the form of molecular hydrogen, which is fragile in the sense that it is destroyed at relatively low energies. I find it extraordinary that the molecular gas can survive being accelerated by jets of highly energetic particles moving at close to the speed of light.

These astronomers say these findings help us further understand the eventual fate of our own galaxy, the Milky Way, which will collide with neighboring galaxy Andromeda in about 5 billion of years.

They say that – when this collision of galaxies occurs – gas will fall to the center of the remnant of the collision. Meanwhile, the jets coming from the central supermassive black hole will, in a way similar to what is now observed in IC 5063, eject the gas from the system, preventing the formation of new stars and growth of the newly formed galaxy.

Bottom line: Astronomers at University of Sheffield used the ESO Very Large Telescope in Chile to discover molecular hydrogen gas in the galaxy IC5063 is moving at extraordinary speeds – 1 million kilometers per hour – at the galaxy’s center. A supermassive black hole at the center of this galaxy is thought to be driving this outflowing gas. Because this process expels cold gas from the galaxy, and because cold gas is needed to form new stars, the astronomers say they’ve gained insight into the process by which galaxies evolve. They’ve extrapolated this insight to reveal something of our own Milky Way galaxy’s future.

Read more about this study from Netherlands Institute for Radio Astronomy