Astronomers directly observed a pair of Milky-Way-like galaxies, seen when the universe was 8% of its current age. They were excited to find the young galaxies surrounded by huge halos.

Milky Way-Like Galaxies in the Early Universe from NRAO Outreach on Vimeo.

How does a galaxy like our own Milky Way form? Until now there’s been a lot of inferring involved in answering that question.

The basic story is that gas collects toward the center of roughly spherical “halos” of matter. The gas then cools, condenses, fragments and eventually collapses to form stars. Generations of stars build up the galaxy and with it the production of heavy elements – such as carbon, oxygen and so on – that populate our periodic table and comprise our familiar physical world. 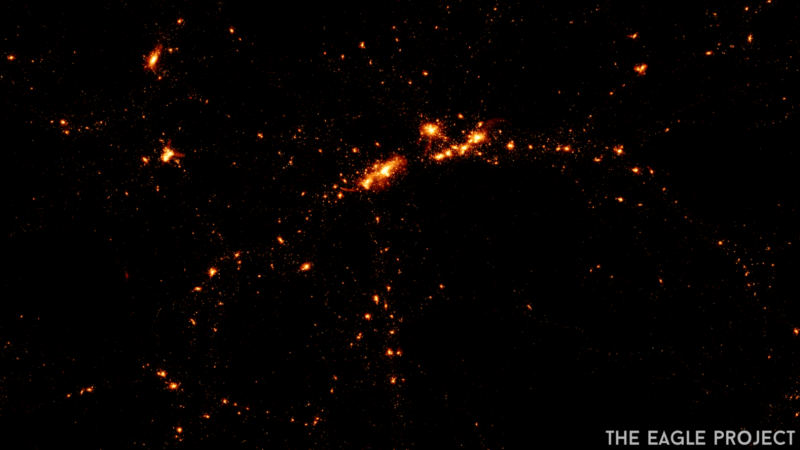 Numerical visualizations of the stars in galaxies forming in the early universe. Image via The Eagle Project, Durham University.

Astrophysicists like me have pieced together this picture thanks largely to theoretical research. We run numerical simulations on the world’s largest supercomputers to capture the processes that govern galaxy formation – gravitational collapse, heating, radiative cooling – at high fidelity. 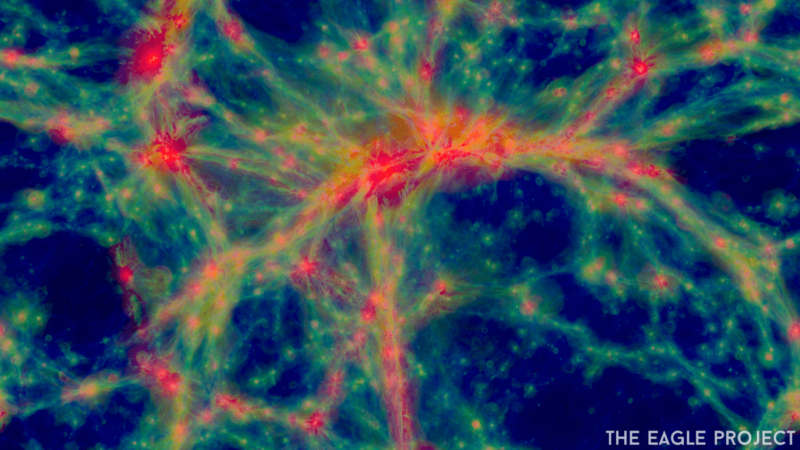 Numerical simulation of gas corresponding to the same region as the previous figure. Young galaxies are dominated by gas and not stars. Image via The Eagle Project, Durham University.

To study many of these processes, we were largely restricted to this kind of theoretical inquiry because we didn’t have the technical capacity to observe them. But things have changed as we’ve witnessed the rise of what we consider the “Great Observatories”: NASA’s Hubble Space Telescope, the twin 10m Keck Telescopes on Manua Kea, Hawaii, and, most recently, the Atacama Large Millimeter/submillimeter Array (ALMA) in northern Chile. With these facilities, astronomers have sought to test and refine the tenets of galaxy formation theory, especially the processes governing galaxy assembly and star formation.

The new data our group is publishing based on observations from ALMA are truly transformative relative to previous observations. They allow us to directly image the gas in nascent galaxies – something that was impossible before – and thereby test our fundamental predictions of galaxy formation.

When we try to directly observe distant galaxies, the principal challenge is the very faint signal that reaches Earth from such great distances. The light from the two galaxies studied in our publication, for example, has traveled 12 billion light years to get here. This also means the light was emitted 12 billion years ago, when the universe was only 1.5 billion years old and galaxies were mere adolescents. And I’m especially interested in studying the gas that fuels star formation, which is particularly difficult to detect.

To address this challenge, starting in 1986 our group – led by the late Arthur M. Wolfe – relied on an indirect way to study distant galaxies. Rather than focusing on the galaxies themselves, we recorded the light from quasars that are even farther away from us. This allows us to probe gas in foreground galaxies.

Quasars are exceedingly bright objects that are powered by supermassive black holes. As a quasar’s light travels through the galactic gas we’re actually interested in, the atoms in the gas scatter a small portion of the light at well-defined wavelengths. It’s these so-called absorption signatures in the quasar’s spectrum that we focus on. The gas is imprinting its signature on the light we can collect with our telescopes. 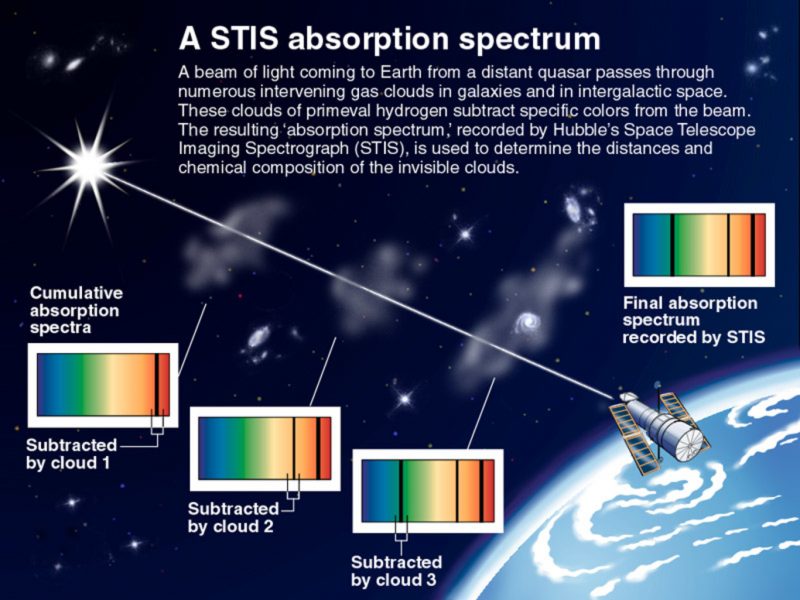 Light from a distant quasar passes through intervening gas clouds in galaxies and in intergalactic space. These clouds of primeval hydrogen subtract specific colors from the beam. The resulting ‘absorption spectrum’ can help determine the distances and chemical composition of the invisible clouds. Image via NASA/STScI.

We pass the light our telescope gathers through a spectrometer, an instrument that allows us to study the brightness as a function of wavelength. Then we can infer that there is in fact gas present between us and the quasar and we can quantitatively measure various properties of the gas.

Arthur used spectrometers at the primary observing suite of the University of California Observatories, first instruments on the Shane 3m telescope of the Lick Observatory and then, upon being commissioned, led research on the powerful Keck telescopes. These data provide estimates on the gas surface density, heavy element enrichment, molecular content and dynamical motions of the galaxy.

This observational experiment, however, is limited. It offers little information on the galaxy’s mass, size or star formation – all things that are fundamental to a galaxy’s makeup. It is critical that we measure these properties to understand the formation history of galaxies like our Milky Way. 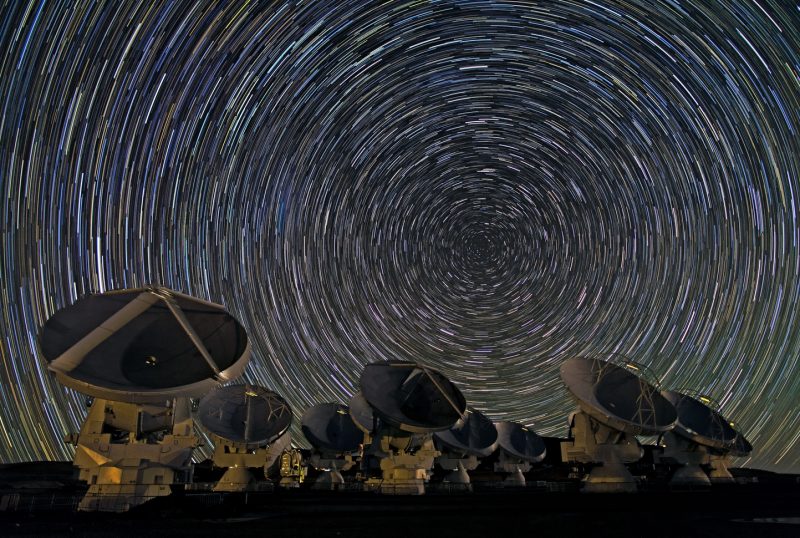 The Atacama Large Millimeter/submillimeter Array is made up of 66 antennas, all pointed at the sky collecting data 24 hours a day. Image via ESO/B. Tafreshi (twanight.org).

In 2003, we reported that the then-future ALMA telescope would be a true game-changer by enabling us to directly image the gas within nascent galaxies. We would have to wait over a decade to begin while the telescope was built – so we had plenty of time to carefully identify the optimal targets and refine our observing strategies.

All the waiting and planning have now paid off. Arthur’s last Ph.D. student, Marcel Neeleman, just published our first results with ALMA and the data are spectacular. Here, in contrast to our previous work, we measure light from the gas in the galaxy itself, which reveals the size and shape of the star-forming regions. And what we saw was not what we expected.

ALMA collects light at wavelengths not visible to the human eye. We focused on two sources in our target galaxies: ionized carbon and warm dust, both of which surround the birthplace of new stars. We were able to create maps based on the light emitted by ionized carbon within a galaxy that we first detected in absorption, via our old technique.

Remarkably, the dense, star-forming gas of the galaxy is greatly offset from the hydrogen gas originally revealed by the quasar spectrum (by approximately 100,000 light years or 30 kiloparsecs). This distance shows that young galaxies are surrounded by a massive reservoir of un-ionized, neutral gas. We further suggest that the gas detected in absorption is likely to accrete back onto the galaxy and fuel future generations of stars.

The ALMA data also uniquely resolve the internal motions of the galaxy’s gas. Our analysis of the dynamics indicates the gas is configured in a large disk – similar to our Milky Way – and rotating with a speed of approximately 120 km/s. This speed is characteristic of what theory predicts for the progenitors of this sort of galaxy.

Lastly, we detected emission from “warm” dust in the galaxy. (Of course, warm is relative – in this case only about 30 degrees Celsius above absolute zero.) We believe the dust is heated by young massive stars; we estimate that the galaxy is forming stars at a rate of over 100 suns per year, a prodigious and precocious rate.

These data demonstrate the power and potential of ALMA to discover and dissect the progenitors of galaxies like our own. They will be invaluable to refine our understanding – in space and time – of the build-up of galaxies. 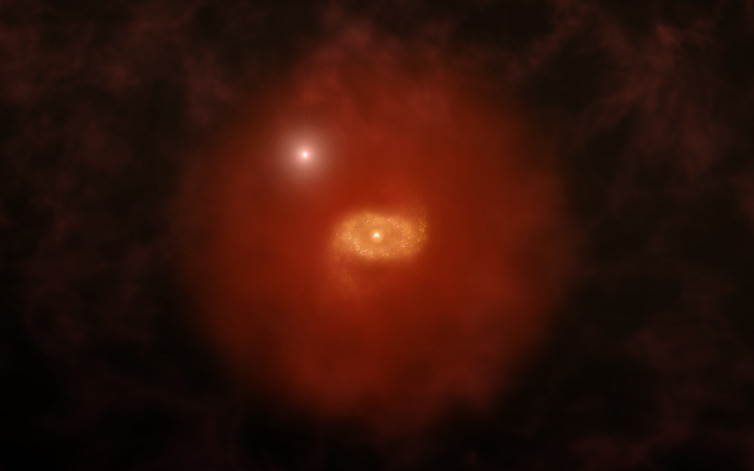 Artist’s impression of a quasar shining through a galaxy’s ‘super halo’ of hydrogen gas. Image via A. Angelich (NRAO/AUI/NSF).

While many of us in the community held some reservations about ALMA (given its great cost), it is now clear to me the payoff will be extraordinary. ALMA research has already paid off in the discovery of protoplanetary disks from which planets form and unlocked hidden secrets of the process of star formation. And ALMA will continue to greatly advance our understanding of how galaxies like the Milky Way form.

Bottom line: An astrophysicist on what scientists are finding out about galaxies formed in the universe’s early days, now that powerful telescopes allow direct observation.