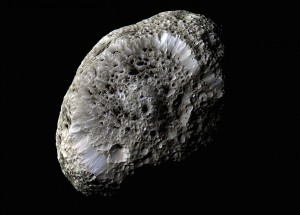 This false-color view of Hyperion was obtained during Cassini’s closest flyby of Saturn’s odd, tumbling moon on Sept. 26, 2005. Image via NASA/JPL-Caltech/SSI

Thank you! Your submission has been received!
Oops! Something went wrong while submitting the form.
END_OF_DOCUMENT_TOKEN_TO_BE_REPLACED