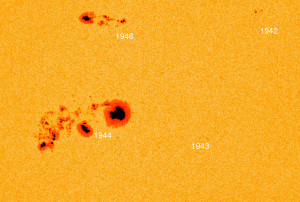 This labeled image taken by SDO’s Helioseismic and Magnetic Imager shows the location of two active regions on the sun, labeled AR1944 and AR1943, which straddle a giant sunspot complex. A Jan. 17, 2014, X1.2-class flare emanated from an area closer to AR1943.
Image Credit: NASA/SDO

Thank you! Your submission has been received!
Oops! Something went wrong while submitting the form.
END_OF_DOCUMENT_TOKEN_TO_BE_REPLACED