Two-dimensional images of these solar prominences make them look as if they’re spinning, and astronomers have long assumed they were. But new research says no.

The movie above from the Helioviewer Project shows a tornado prominence on the sun – what you might hear called simply a solar prominence – observed by the NASA’s Solar Dynamics Observatory in April, 2015. See the tiny image of the Earth, superimposed for scale? These things are big! Better data collected over the past several years by NASA’s Solar Dynamics Observatory (SD0) has revealed that these giant structures on the sun do look much like earthly tornadoes. And the term tornado prominence has been around for decades, at least. But a team of European scientists said on April 6, 2018, that these structures – vastly bigger than Earth itself – don’t appear to spin as earthly tornadoes do.

Instead, these scientists said, sun tornadoes follow horizontal magnetic field lines extending out of the sun. They seem to be anchored on the sun’s surface.

Solar prominences are much bigger than Earth itself; they can extend hundreds of thousands of miles into space in contrast to Earth’s 8,000-mile (13,000-km) diameter. Prominences are made of plasma, not a solid, not a liquid, not a gas, but sometimes called a fourth state of matter in which the parts of atoms, the electrons and neutrons, are disassociated from each other, wandering freely.

A solar prominence forms quickly, shooting out of the sun in about an earthly day. Most are brief, but some persist for months.

Looking at solar prominences in two dimensions reinforced the idea they look like tornadoes. But the European researchers were able to add a third dimension, using the Doppler effect, in their recent research. They were able to measure the speed of the moving plasma, as well as its direction, temperature and density. Their statement explained:

Using several years’ worth of observations, [astronomers] are now able to build up a more complete picture of the magnetic field structure that supports the plasma.

And that picture doesn’t include a tornado-like spin. 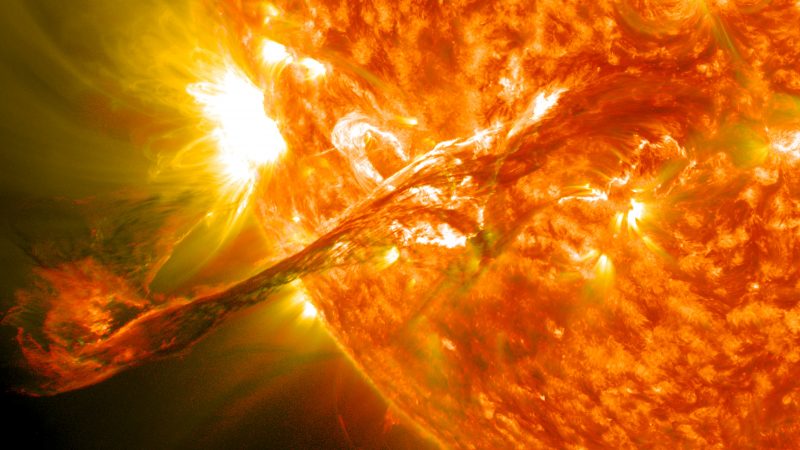 Nicolas Labrosse of the University of Glasgow presented this new work at last week’s European Week of Astronomy and Space Science (EWASS) in Liverpool. He explained:

We found that despite how prominences and tornadoes appear in images, the magnetic field is not vertical, and the plasma mostly moves horizontally along magnetic field lines. However, we see tornado-like shapes in the images because of projection effects, where the line of sight information is compressed onto the plane of the sky.

The overall effect is similar to the trail of an airplane in our skies: the airplane travels horizontally at a fixed height, but we see that the trail starts above our heads and ends up on the horizon. This doesn’t mean that it has crashed!

Bottom line: Our sun has “tornadoes,” too, also known as solar prominences. Astronomers thought they might spin as earthly tornadoes do, but new research says no.

Click to see the sun now, from NASA SDO