The sun produced a coronal mass ejection, or CME, today (November 20, 2012). See a NASA spacecraft photo of the CME as it leaves the sun.

The sun erupted with a coronal mass ejection or CME earlier today. The eruption began at 7:09 a.m. EST (12:09 UTC). When a CME erupts from the sun, it sends solar particles into space, which may – if the CME is headed our way – reach Earth several days later. There is no danger to us on Earth’s surface from an Earth-directed CME, but these events can affect electronic systems in satellites and on Earth. 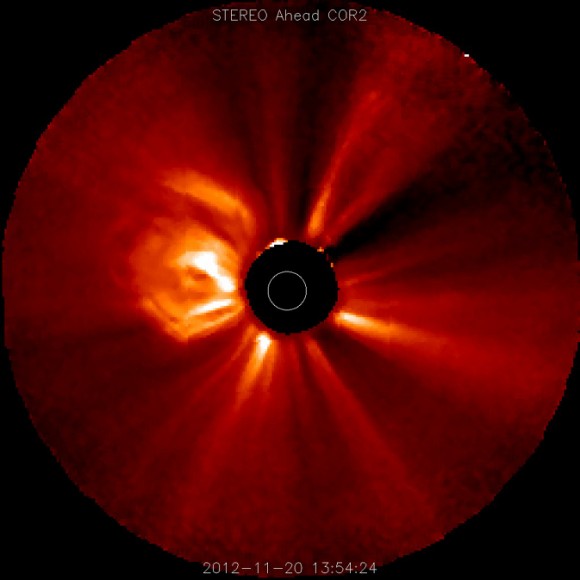 In this image, the sun is at the center, obscured by a disk to block its brightness. The November 20, 2012 coronal mass ejection, or CME, is erupting from the left side of the sun, as seen here. IMage via NASA/STEREO

NASA says the CME left the sun at speeds of 450 miles per second, which, it says, is a slow-to-average speed for this type of solar phenomenon. When a CME erupts from the sun, a geomagnetic storm occurs, producing beautiful auroras, or northern lights, for those at northerly latitudes.

NASA says that, in the past, CMEs with the slow-to-average speed of the November 20 event haven’t typically caused substantial geomagnetic storms. NASA explained:

They have caused auroras near the poles but are unlikely to cause disruptions to electrical systems on Earth or interfere with GPS or satellite-based communications systems.

Bottom line: The sun produced a coronal mass ejection, or CME, today (November 20, 2012). See a photo of the CME leaving the sun in this post.