Comet Siding Spring swept closer to Mars than any known comet in recorded history, creating the largest-ever-known meteor shower. But the sun got in on the act. 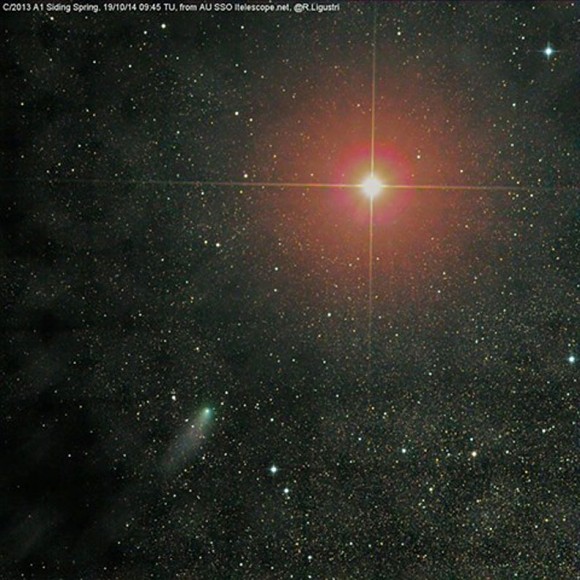 View from Earth – captured by an astrophotographer – as Comet Siding Springs swept past Mars on October 19, 2014. Photo by Rolando Ligustri. Used with permission.

Remember how exciting it was in October of 2014, When Comet C/2013 A1 (Siding Spring) swept extremely close to the planet Mars?! It came closer than any known comet in recorded history – within 90,000 miles (140,000 km), about one-third the distance between our Earth and its moon – on October 19, 2014. Material in the comet’s tail dumped debris into Mars’ thin atmosphere, and space agencies coordinated multiple spacecraft to witness a spectacular meteor shower, the largest in recorded history. Now, however, scientists report that the pesky sun, always trying to get in on the act, had launched a very powerful coronal mass ejection (CME) that arrived at Mars only 44 hours before the comet. Speaking last Thursday (September 21, 2017) at a special session of the European Planetary Science Congress (EPSC) 2017 in Riga, Latvia, scientists said the CME from the sun created:

… significant disturbances in the martian upper atmosphere and complicated analysis of the data.

Beatriz Sanchez-Cano of the University of Leicester, a co-organizer of last week’s special session, explained in a statement:

Comet Siding Spring flew very close to Mars, at one-third of the Earth-moon distance. This is one of the most exciting planetary events that we’ll see in our lifetime. Mars was literally engulfed by the coma, the comet’s outer atmosphere, for several hours. However, a deeper analysis of the data shows that the comet’s interaction with Mars is much more difficult to understand than we expected because of the effects of a CME that hit Mars a few hours earlier. In addition, the encounter happened at the peak of the martian dust season. We need to understand the full context of the observations in order to separate out the real cometary effects on Mars. 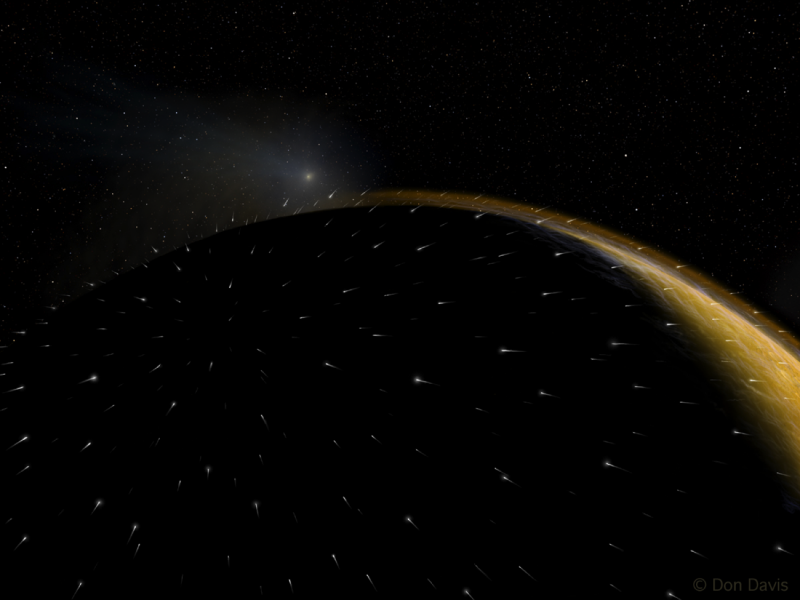 Space artist Don Davis created this concept of a spectacular martian meteor shower during the close encounter with Comet Siding Spring. In this image, the comet has passed the planet in this image and is shown left and above the planet, heading towards the outer solar system. The planet’s atmosphere is exaggerated to highlight the presence of meteors, bits debris left behind by the comet, entering the martian atmosphere. Image via Don Davis/ IUVS Team. 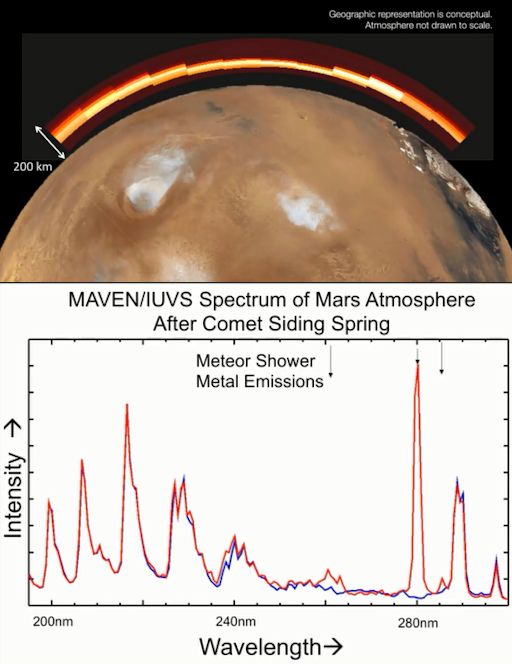 Example of the data, originally released by scientists in 2014, after Comet Siding Spring passed Mars on October 19. Scientists now say this data was “complicated” by a coronal mass ejection from the sun (CME) that arrived 44 hours before the comet.

The presence of the CME was likely initially disappointing to scientists, because science is easier when conditions are simpler. But it’s also very interesting, because Comet Siding Spring at Mars was such a rare opportunity, likely to occur only once every 100,000 years, scientists said. So the analysis was worthwhile. The scientists’ statement explained:

CMEs occur when magnetic field lines at the visible surface of the sun become tangled and break, releasing large quantities of electrically charged particles into space. The interval before, during and after the Comet Siding Spring encounter with Mars was one of the most disturbed periods of the current solar cycle. The CME was launched from the largest sunspot group observed in the last 24 years and several additional solar flares were detected that would have impacted on Mars around this time.

Sanchez-Cano has investigated the interaction of the comet with energetic particles from the sun, and the effects of the CME and cometary encounter on the martian atmosphere, using data from ESA’s Mars Express mission, NASA’s MAVEN and Mars Odyssey orbiters, and the Curiosity rover on the martian surface.

Her results show clear signs of ‘showers’ of energetic oxygen ions and dust from the time that Mars was inside the comet’s coma [the nebulous envelope of materials that lifts from a comet’s nucleus, or core, when the comet is near the sun] up to 35 hours after Siding Spring’s closest approach. These ions, most likely from the comet, were accelerated by the highly active solar wind during Siding Spring’s encounter and delivered into the martian atmosphere.

This created an extra electrically-conducting layer (ionosphere) at a lower level than the planet’s usual ionosphere. None of those particles seem to have arrived at the martian surface as observed by the Curiosity rover, confirming that they were absorbed in the atmosphere. 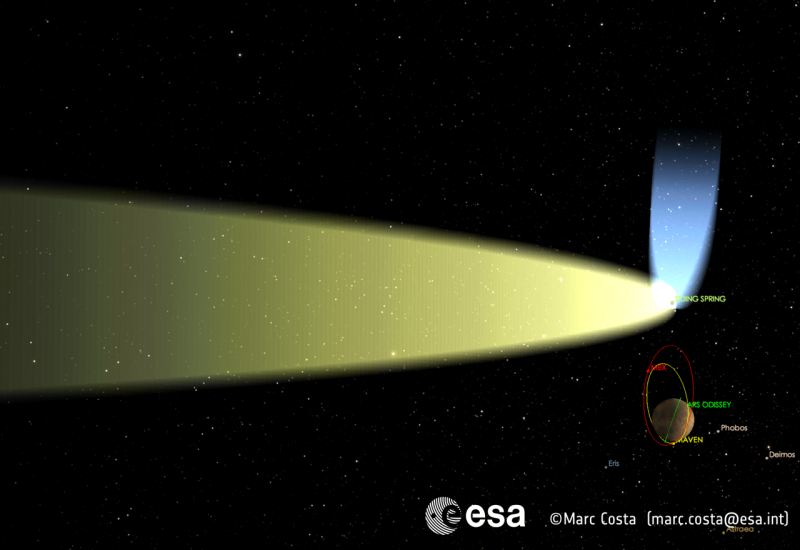 Still from animation showing encounter of Comet Siding Spring with Mars, showing the orientation of the comet’s tails and orbits of the spacecraft at Mars. Image via Marc Costa/European Space Agency

Mats Holmström of the Swedish Institute of Space Physics, who co-presented these results with Sanchez-Cano, said:

Our data and modeling show that the upper layers of the martian atmosphere were disturbed by the passing comet. The precipitation from the comet was mainly water, either in the form of neutral molecules or broken down into ions through interactions with light. However, [results from the Mars Express ASPERA-3 instrument] show that the amount of ionized water interacting with the martian atmosphere was much smaller than expected, compared to the amount of neutral water molecules and the charged particles from the solar wind. This means that there were less of the ions interacting with the upper atmosphere and more water molecules interacting at lower depths. We think that, because of the relatively large size and activity of the comet, the majority of ionized water was carried away by the solar wind rather than dropping down into Mars’s atmosphere.

Matteo Crismani, of the University of Colorado at Boulder, another co-presenter at the special session, said that the meteor shower caused by the Mars encounter in 2014 with Comet Siding Spring was the largest in recorded history. He said it peaked at 30 meteors per second and lasted up to 3 hours.

If only some humans (like me!) could have been there to see it!

Bottom line: There was huge excitement in October 2014 when Siding Spring swept closer to Mars than any known comet in history. It dumped debris into Mars’ atmosphere, creating a spectacular meteor shower. Now scientists report that a coronal mass ejection from the sun – which arrived at Mars just hours before the comet – complicated analysis of the data.

Read more: What is a coronal mass ejection?