After a 10-month interplanetary journey of 442 million miles, NASA’s Mars Atmosphere and Volatile Evolution (MAVEN) spacecraft successfully entered Mars’ orbit at 10:24 p.m. EDT last night (September 21, 2014). MAVEN is the first spacecraft dedicated to exploring the upper atmosphere of Mars. Its orbit-insertion maneuver began with the firing of six small thruster engines to steady the spacecraft. The engines then ignited and burned for 33 minutes to slow the craft, allowing it to be pulled into an elliptical orbit around Mars with a period of 35 hours. 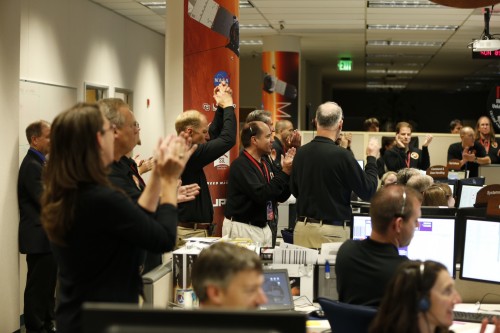 Scientists cheer as the successful orbit insertion for Mars MAVEN is confirmed. Image via Lockheed Martin

Following orbit insertion, MAVEN will begin a six-week commissioning phase that includes maneuvering into its final 4.5-hour science orbit and testing the instruments and science-mapping commands.

MAVEN then will begin its one Earth-year primary mission, taking measurements of the composition, structure and escape of gases in Mars’ upper atmosphere and its interaction with the sun and solar wind. Bruce Jakosky, MAVEN principal investigator from the University of Colorado, Boulder’s Laboratory for Atmospheric and Space Physics, said in a press release:

The MAVEN science mission focuses on answering questions about where did the water that was present on early Mars go, about where did the carbon dioxide go. These are important questions for understanding the history of Mars, its climate, and its potential to support at least microbial life.

MAVEN’s primary mission includes five deep-dip campaigns, in which the spacecraft’s periapsis, or lowest orbit altitude, will be lowered from 93 miles (150 kilometers) to about 77 miles (125 kilometers). NASA says these measurements will provide information down to where the Martian upper and lower atmospheres meet.

[The mission] also will better inform a future mission to send humans to the Red Planet in the 2030s. 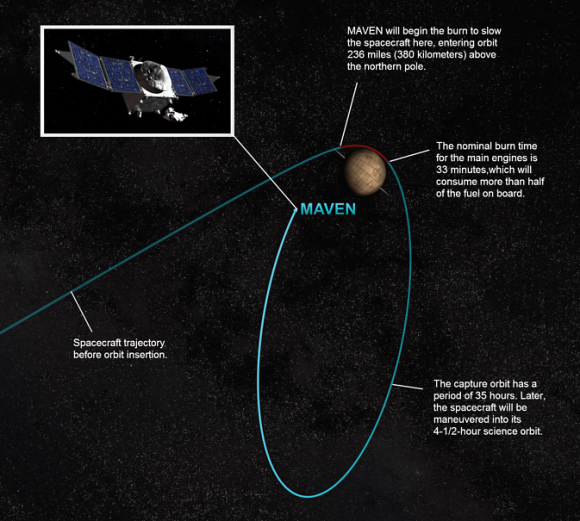