Japanese astronomers probing deeply back into our universe’s early history have found 7 galaxies at a time when the universe was only 700 million years old. 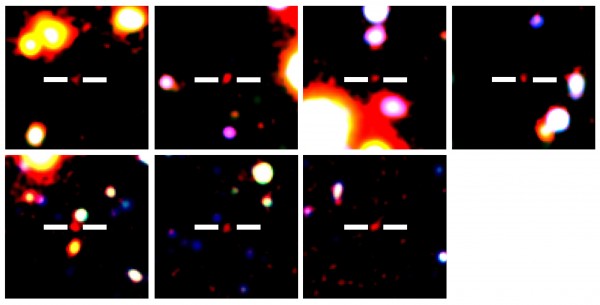 View larger. | Seven newly detected galaxies in the early universe, as they appeared 13.1 billion years ago. Image via Subaru/ICRR, University of Tokyo.

When you look at the photo above, you’re looking back more than 13 billion years to the very early universe. You’re seeing very faint galaxies that are exceedingly young, born not long after the Big Bang. That’s according to a new study led by Akira Konno and Masami Ouchi of the University of Tokyo’s Institute for Cosmic Ray Research. These astronomers say the 7 galaxies appeared quite suddenly, that is, within 700 million years of the Big Bang.

The team found the galaxies while using Japan’s Subaru [in English, Pleiades] Telescope in Hawaii. They say that, although the Hubble Space Telescope has found more distant galaxies, these 7 galaxies at at 13.1 billion light-years represent a distance milestone for Subaru.

But when they found these galaxies, and realized how young they must be, they got excited. Akira Konno, the graduate student heading the analysis of this data, pointed out obstacles that the Subaru Telescope had to overcome to make the observations. He said:

It is quite difficult to find the most distant galaxies due to the faintness of the galaxies.

So, we developed a special filter to be able to find a lot of faint LAEs. We loaded the filter onto Suprime-Cam [the telescope’s prime focus camera] and conducted the most distant LAE survey …

He said the team focused on a single spot in the sky over 106 hours. That’s one of the longest integration times performed at Subaru Telescope. Collecting light over these many hours allowed for what the team called unprecedented sensitivity and let them search for as many of the most distant LAEs as possible.

According to Konno, the team expected to find several tens of LAEs. Instead they only found these 7 galaxies. He said:

At first we were very disappointed at this small number.

But we realized that this indicates LAEs appeared suddenly about 13 billion years ago. This is an exciting discovery.

Read more about these 7 very young galaxies from Subaru Telescope 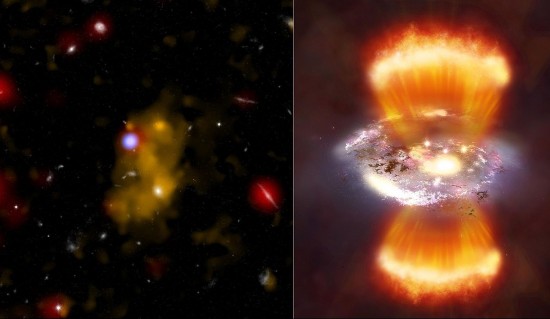 A Lyman alpha emitter (left) and an artist’s impression of what one might look like if viewed at a relatively close distance (right), via Chandra X-ray Observatory. Read more about this image.

Bottom line: Japanese astronomers probing deeply back into our universe’s early history have found 7 galaxies at a time when the universe was only 700 million years old.