The Little Red Spot is Jupiter’s 3rd-largest anticyclonic storm. Earth-based observers have tracked it for the last 23 years. The Juno spacecraft captured this amazing image. 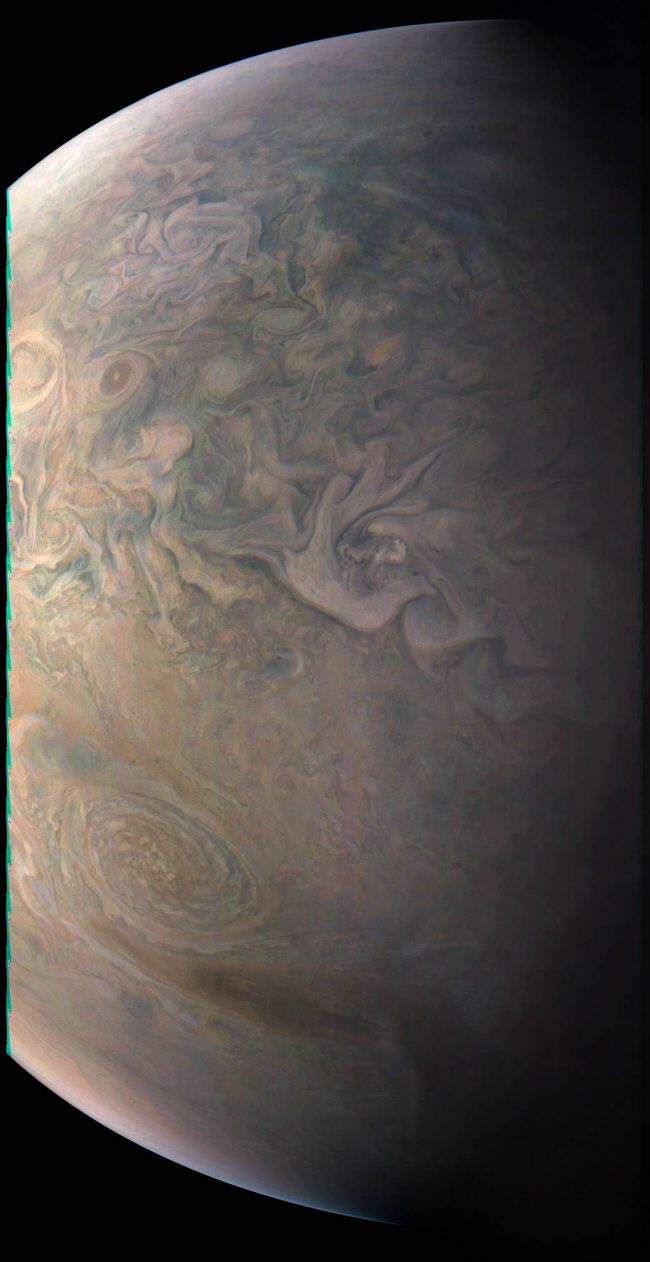 View larger. | Jupiter from the Juno spacecraft’s JunoCam on December 11, 2016. The craft acquired this shot of Jupiter’s northern latitudes, at an altitude of only 10,300 miles (16,600 km) above Jupiter’s cloud tops. It shows the giant storm on Jupiter known as the Little Red Spot (lower left). Image via NASA/ JPL-Caltech/ SwRI/ MSSS/ Gerald Eichstaedt/ John Rogers.

The Juno spacecraft has been orbiting Jupiter since July 4, 2016 in a highly elliptical, 53-day orbit. It collects data primarily at its periodic perijoves, its closest points in orbit to the giant planet, every 53 days. The last perijove was December 11, 2016, and that’s when the spacecraft’s JunoCam imager collected the data to make the image above, which was released this week (January 25, 2017). The spacecraft had gone into a safe mode prior to the previous perijove, on October 19, 2016. During that safe mode, Juno’s instruments were turned off, and no data collection took place. So Juno scientists were no doubt relieved that seven of the spacecraft’s instruments and its JunoCam were operating normally during the December perijove. Much data was collected, which was then returned to Earth.

NASA said of the image at the top of this page:

This view of the high north temperate latitudes fortuitously shows NN-LRS-1, a giant storm known as the Little Red Spot (lower left). This storm is the third largest anticyclonic reddish oval on the planet, which Earth-based observers have tracked for the last 23 years. An anticyclone is a weather phenomenon with large-scale circulation of winds around a central region of high atmospheric pressure. They rotate clockwise in the northern hemisphere, and counterclockwise in the southern hemisphere. The Little Red Spot shows very little color, just a pale brown smudge in the center.

The color is very similar to the surroundings, making it difficult to see as it blends in with the clouds nearby. Citizen scientists Gerald Eichstaedt and John Rogers processed the image and drafted the caption.

The public is invited to peruse and process JunoCam’s raw images into image products. 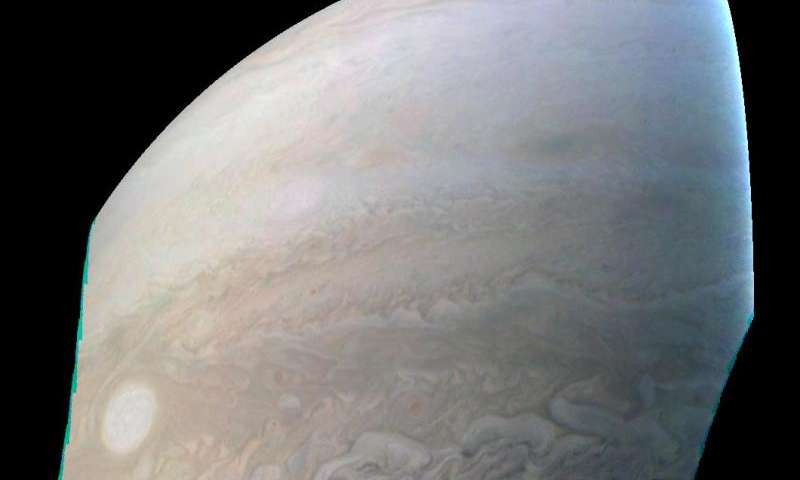 Here’s another December 11, 2016 image from the JunoCam imager on NASA’s Juno spacecraft. At the time the image was taken, the spacecraft was about 15,300 miles (24,600 km) from the planet. This image highlights the 7th of 8 features forming a ‘string of pearls on Jupiter—massive counterclockwise rotating storms that appear as white ovals in the gas giant’s southern hemisphere. Since 1986, these white ovals have varied in number from 6 to 9. There are currently 8 white ovals visible. Via NASA/JPL-Caltech/SwRI/MSSS/Phys.org.

Click here for more info about the Juno spacecraft

Bottom line: Beautiful new image from JunCam of Jupiter and its Little Red Spot, acquired at the Juno spacecraft’s last perijove on December 11, 2016.