Brightest cluster galaxies (BCGs) appear not to have tripled in size, as conventional models predicted.

Galaxies are thought to develop by the gravitational attraction between and merger of smaller sub-galaxies, a process that standard cosmological ideas suggest should be ongoing. But new data from a team of scientists from Liverpool John Moores University directly challenges this idea, suggesting that the growth of some of the most massive objects stopped seven billion years ago when the universe was half its present age. On Monday, April 18, 2011, team member Claire Burke will present their work at the Royal Astronomical Society’s National Astronomy Meeting (NAM 2011) in Llandudno, Wales. 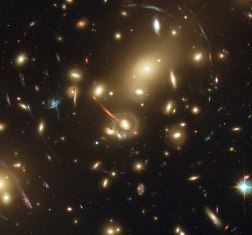 How galaxies form and then evolve is still a major unanswered question in astronomy. The sub-galaxy units thought to have merged to make galaxies are themselves associated with fluctuations in the density of material in the cosmos left over from the Big Bang and seen today as temperature “ripples” in the cosmic background radiation.

To study galaxy evolution, the team looked at the most massive galaxies in the universe, known as brightest cluster galaxies (BCGs), so called because of their location at the center of galaxy clusters, structures that typically contain hundreds of galaxies.

In the nearby parts of the universe, BCGs are elliptical in shape and are the largest, most uniform, and most massive class of galaxies observed, with each galaxy having a mass equivalent to up to 100 trillion (100 million million) suns. Like smaller elliptical galaxies, BCGs are composed of old red stars and are thought to have formed through mergers of the dense population of sub-galaxies that were found in the center of galaxy clusters. Studying how BCGs grow in size gives an insight into the formation and evolution of galaxies in general.

Measuring the sizes of BCGs has always been difficult as their outer regions are very faint. Burke and her team have overcome this by using long-exposure images from the Hubble Space Telescope data archive that pick up the dimmer parts of these galaxies. The BCGs they studied are so distant that the light we detect from them left 7 billion years ago, so they appear as they were when the universe was less than half its present age.

When they examined the Hubble images, the team found that these distant BCGs are almost the same size as their nearby counterparts and that these galaxies can have grown by at most 30% in the last 9 billion years. This is in line with other work by the same research group, but is quite unlike the observed development of “regular” elliptical galaxies. More significantly, conventional simulations of the evolution of the universe predict that BCGs should have at least tripled in size over that time.

The lack of growth of the most massive galaxies is a major challenge to current models of the formation and evolution of large scale structure in the universe. Our work suggests that cosmologists appear to lack some of the crucial ingredients they need to understand how galaxies evolved from the distant past to the present day.

Summary: Claire Burke from Liverpool John Moores University and her team looked at bright cluster galaxies (BCGs), using long-exposure images from the Hubble Space Telescope data archive. Their study suggests that the BCGs grew by no more than 30% in the last 9 billion years and did not triple in size, as conventional models predict.

Holland Ford: Massive cluster of galaxies acts like a lens