Will greater understanding of what makes planets habitable by microbes lead to the discovery of life on other worlds?

Astrobiologists and planetary scientists have long sought a direct way to assess the suitability for life – what they call the habitability – of worlds both in our solar system and beyond. Now they have one.

What’s more, in this first quantitative evaluation of planetary habitability, a biophysicist – Prof. Abel Mendez in the Department of Physics and Chemistry at the University of Puerto Rico at Arecibo – has identified some potential habitats in our solar system. 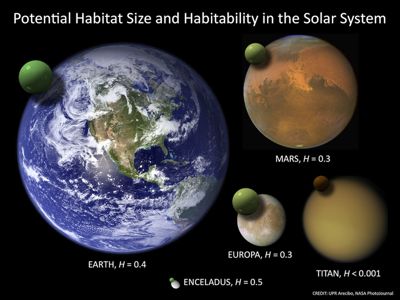 The image at right shows some of the study’s results. It shows a comparison of the potential habitable space available on the planets Earth and Mars, Europa (a moon of Jupiter), plus Titan and Enceladus (moons of Saturn).

The green spheres represent the global volume with the right physical environment for most terrestrial microorganisms. On Earth, the biosphere includes parts of the atmosphere, oceans, and subsurface. The potential global habitats of the other planetary bodies are deep below their surfaces.

Notice Saturn’s moon little moon Enceladus, at the bottom of this image. It has the smallest volume of the worlds shown here, but it has the highest habitability among these worlds, for its size, according to Prof. Mendez’ study. However, if microbial life exists on Enceladus, it is too far below the moon’s surface for direct exploration. If it exists, we’ll probably never find it.

Meanwhile, according to the study, the planet Mars and Jupiter’s moon Europa are the best compromise between potential for life and accessibility.

Why is this study important? It’s not about human life, after all, and the habitable realms indicated by the study are often below the surfaces of worlds, where we can’t explore them. The good of the study is that it provides a concrete way to compare the chances for life’s suitability, not just in our solar system, but also among the extrasolar planets now known to orbit more than 300 distant stars.

As you might imagine, the environmental factors that control a planet’s habitability are complex. Prof. Mendez started his study by developing a Quantitative Habitability Theory – what he calls QH Theory – to assess the current state of habitability on Earth and to establish a baseline for relevant comparisons among worlds in space.

He said both parameters – H and M – are related to other physiological and environmental variables and can be used to make predictions about the distribution, abundance, and productivity of primary producers, such as plants and phytoplankton, and microbial life in general.

He said further studies will expand the definition of habitability to include other environmental variables such as light, carbon dioxide, oxygen, and nutrients concentrations.

Prof. Mendez is presenting his results on today at the 41st Annual Meeting of the Division for Planetary Sciences of the American Astronomical Society in Fajardo, Puerto Rico.

He’s starting collaborative efforts in this line of research with other scientists from the University of Puerto Rico at Rio Piedras and Mayaguez, NASA Ames, the SETI Institute, and other national and international institutions.

The image at the top of this post shows freshwater phytoplankton, mainly diatoms and dinoflagellates from Lake Chuzenji in Japan. Prof. Mendez’ study lets scientists compare the likelihood of microbial life such as this on Earth with that on other worlds. 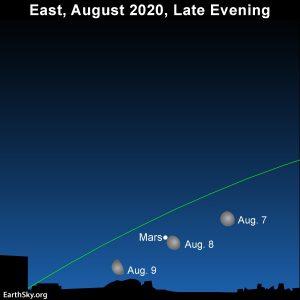