This spectacular image features spiral galaxy Messier 106 and its diminutive neighbors, as well as a dense field of background galaxies and foreground stars.

The image below, of galaxy Messier 106 (M106) was taken with the Nicholas U. Mayall 4-meter Telescope at Kitt Peak National Observatory in Arizona. M106 – also known as NGC 4258 – is a spiral galaxy, like our own Milky Way galaxy. In a spiral galaxy, the stars, gas and dust are gathered in spiral arms that spread outward from the galaxy’s center. This view of M106 captures the entire galaxy, detailing the glowing spiral arms, wisps of gas, and dust lanes near its center, as well as the twisting bands of stars and gas at the galaxy’s outer edges. You can also see two dwarf galaxies in the image; NGC 4248 in the lower right and UGC 7358 in the lower left. 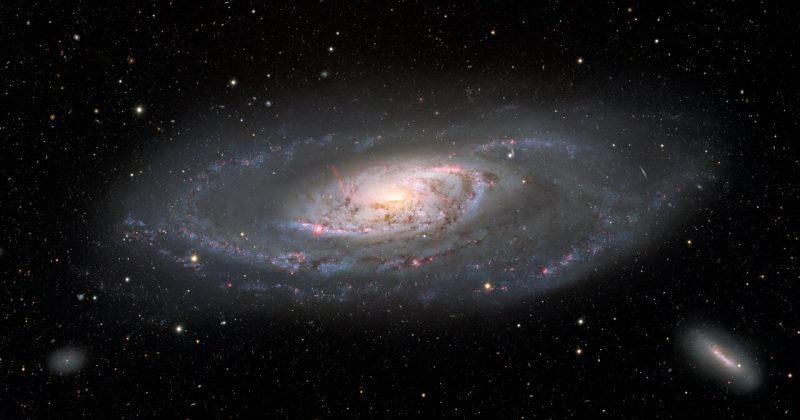 View larger. | This spectacular image highlights the majestic spiral galaxy Messier 106 and its diminutive neighbors, as well as a dense field of background galaxies and foreground stars. This may be the best view yet of Messier 106 in its entirety, showing both the warped central disk and the tenuous outer reaches of the galaxy. Image via NSF NOIRLab.

According to a statement from NSF’s NOIRLab:

A popular target for amateur astronomers, Messier 106 can be spotted with a small telescope in the constellation Canes Venatici. Messier 106 is similar in size and luminosity to our galactic neighbor the Andromeda galaxy, but it lies 10 times farther away — more than 20 million light-years from Earth. Though the galaxy measures more than 130,000 light-years from edge to edge, the vast distance between it and the Milky Way renders Messier 106 minuscule when seen from here. Its size in the night sky — if it were visible to the unaided eye — is less than that of a penny held at arm’s length!

Read more about this image from NOIRLab.