Astronomers made the sharpest and clearest map yet of a distant starburst galaxy, where stars form 1,000 times faster than in our Milky Way. They’re now calling this galaxy an “unstoppable monster.” 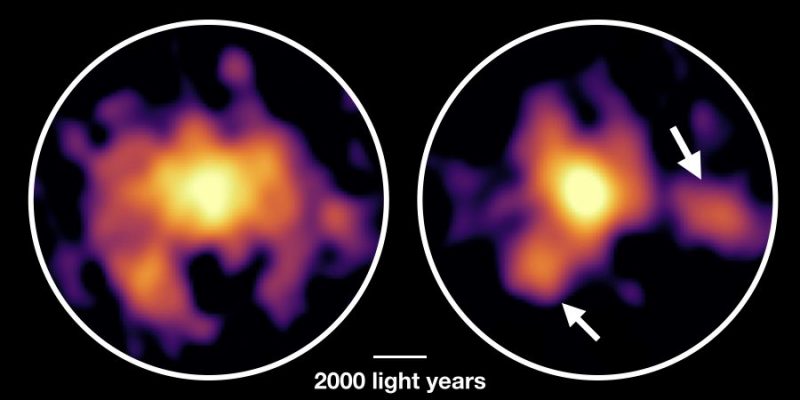 Monster galaxy COSMOS-AzTEC-1 observed with the ALMA telescope in Chile. ALMA revealed the distribution of molecular gas (left) and dust particles (right). In addition to the dense cloud in the center, the research team found 2 dense clouds several thousand light-years away from the center. These dense clouds are dynamically unstable and thought to be the sites of intense star formation. Image via ALMA (ESO/NAOJ/NRAO), Tadaki et al.

Starburst galaxies, sometimes called monster galaxies, typically form stars at a pace some 100 times faster than in our own Milky Way galaxy. But a newly mapped starburst galaxy labeled COSMOS-AzTEC-1 – located 12.4 billion light-years away, in the early universe – is now known to be forming stars 1,000 times faster than our Milky Way. It’s also been found to have star-forming regions not in its galactic center, but in vast clouds located off-center by several thousand light-years. This galaxy is, indeed, a dynamic and mysterious place, so much so that the astronomers who studied it called it an unstoppable monster.

It’s not truly unstoppable, of course. Stars are formed from gas and dust in a galaxy, and starburst galaxies use up their gas and dust faster than ordinary galaxies like our Milky Way. Once the gas and dust diminishes, star formation slows down.

Astronomer Min Yun at UMass Amherst was a member of the team that discovered this galaxy in 2007, using an instrument built at UMass called AzTEC. Note that this galaxy bears the name AzTEC-1. It’s likely the first galaxy, or a very important early galaxy, discovered by this instrument; that’s one way galaxies are named. Yun commented:

A real surprise is that this galaxy seen almost 13 billion years ago has a massive, ordered gas disk that is in regular rotation instead of what we had expected, which would have been some kind of a disordered train wreck that most theoretical studies had predicted.

He said the new observations – made at the Atacama Large Millimeter/submillimeter Array (ALMA) in northern Chile – show that this gas disk is dynamically unstable now. That is, the entire gas disk that makes up this galaxy is fragmenting and undergoing a gigantic episode of starburst, at a rate more than 1,000 times that of our Milky Way. 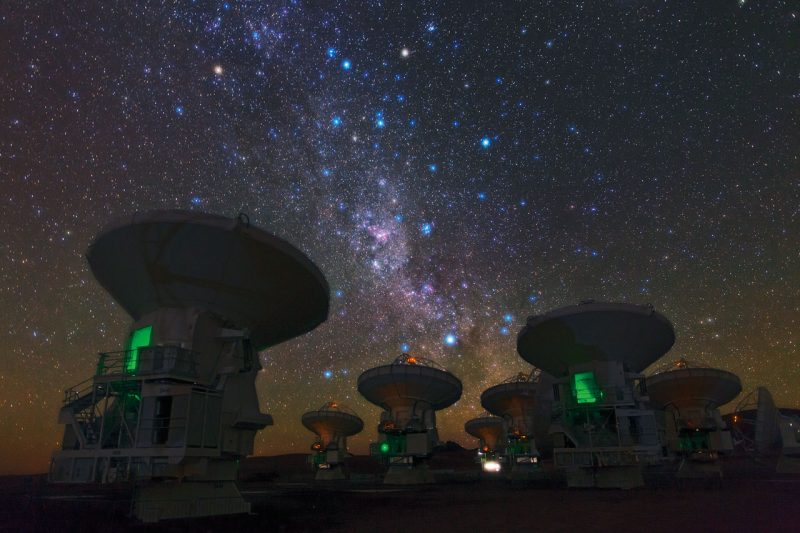 Japanese astronomer Ken-ichi Tadaki is lead author of the new study – which is published in the peer-reviewed journal Nature. He said:

We found that there are two distinct large clouds several thousand light-years away from the center [of the galaxy COSMOS-AzTEC-1]. In most distant starburst galaxies, stars are actively formed in the center. So it is surprising to find off-center clouds.

Tadaki, Yun and team used the ALMA data to compile detailed maps of molecular clouds, which are the types of gas-and-dust clouds in which new stars are born. They found that COSMOS-AzTEC-1 is rich in the ingredients of stars, but it was still difficult to figure out the nature of the cosmic gas in the galaxy. They said they used ALMA’s high resolution and high sensitivity to observe the galaxy and obtain a detailed map of the distribution and the motion of the gas. They said it’s the highest resolution – that is, the sharpest and clearest – molecular-gas map of a distant monster galaxy ever made.

Yun explained part of the reason astronomers are so fascinated by these distant starburst galaxies:

How these galaxies have been able to amass such a large quantity of gas in the first place and then essentially turn the entire gas reserve into stars in the blink of an eye, cosmologically speaking, was a completely unknown question about which we could only speculate. We have the first answers now.

The team estimated that the gas in COSMOS-AzTEC-1 will be completely consumed in 100 million years, which is 10 times faster than in other star-forming galaxies.

Read more via UMass and ALMA 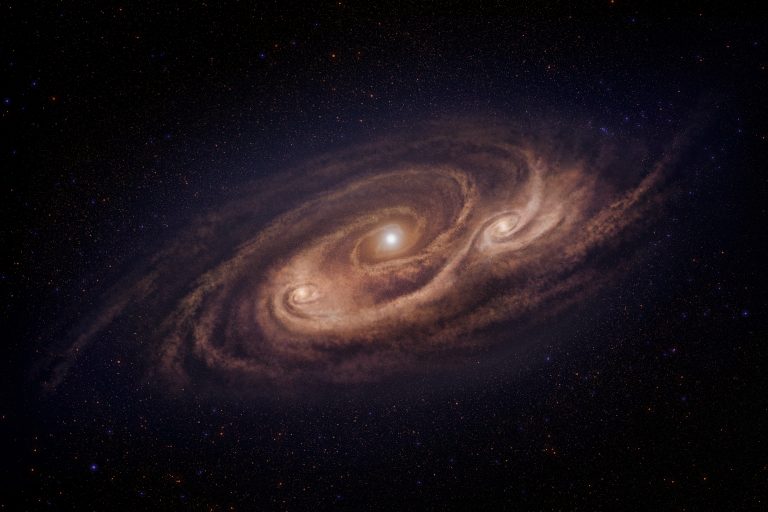 Bottom line: The monster or starburst galaxy COSMOS-AzTEC-1 is now known to have two gigantic star-forming lobes off-center in the galaxy. It’s known to be producing stars at a rate 1,000 times faster than our Milky Way.

Source: The gravitationally unstable gas disk of a starburst galaxy 12 billion years ago