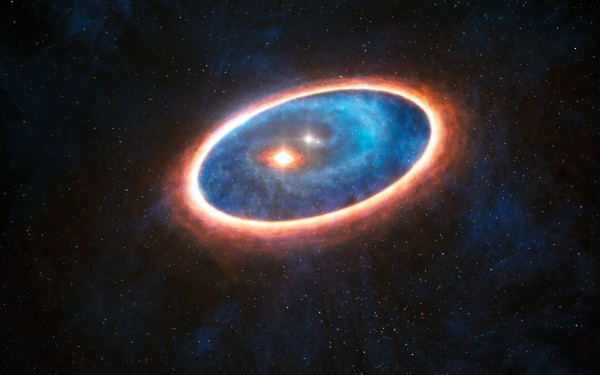 Astronomers using the ALMA telescope in Chile have peered 460 light-years away – in the direction of our constellation Taurus – to discover a young multiple star system they say appears as a wheel within a wheel. In other words, there appear to be two disks, one within the other, and the astronomers have found gas flowing in the region between the two disks. They say this gas might let planets form in the gravitationally perturbed environment of this system. Since many of sun-like stars in our Milky Way galaxy are born in multiple star systems, these findings could have major consequences for the hunt for exoplanets. The journal Nature published their results on October 30, 2014.

French astronomer Anne Dutrey led the research centered on the multiple star system GG Tau-A. It was thought GG Tau-A was a simple double star system, like so many known in our Milky Way galaxy, but recently one of the component binary stars itself was found to be a double star. This object is only a few million years old.

While observing these structures with ALMA, the team made the exciting discovery of gas clumps in the region between the two disks. The new observations suggest that material is being transferred from the outer disk to the inner disk, creating, in their words, “a sustaining lifeline between the two.” Dutrey said:

Material flowing through the cavity was predicted by computer simulations but never imaged before. Detecting these clumps indicates that material is moving between the disks, allowing one to feed off the other.

These observations demonstrate that material from the outer disk can sustain the inner disk for a long time. This has major consequences for potential planet formation.

Planets are born from the material left over from star birth. This is a slow process, meaning that an enduring disk is needed for planet formation. These astronomers say that if this same feeding process occurs in other multiple-star systems, these observations may explain the frequency with which planets have been and continue to be discovered in these systems.

Bottom line: Scientists have found dust and gas flowing from an outer disk around a star toward a possible second, smaller disk around a second star. The system is called GG Tau-A, and it lies 460 light-years away, in the direction of the constellation Taurus. Planets may be forming here, and if so the work has implications for planet formation in other multiple star systems.