Astronomers see a star ‘spaghettified’ by a black hole

Astronomers have spotted a rare blast of light from a star being ripped apart by a supermassive black hole. The phenomenon – known as a tidal disruption event – is the closest such flare recorded to date at just over 215 million light-years from Earth.

It must be wonderful for astronomers when a concept they learned about in school as theory is seen in the real universe. That’s happened a lot in recent decades, but nowhere so interestingly as on Monday, October 12, 2020, when astronomers announced they’ve witnessed a star undergoing spaghettification. That is, the star is being ripped apart as it falls into a supermassive black hole, in a galaxy only 215 million light-years away. They didn’t see the star up close as it was being shredded; our earthly technologies don’t extend that far. But they did capture the star’s last moments, just before it was ripped apart by the black hole, in what astronomers call a tidal disruption event. The event created a flare of light, which they said is the closest such flare recorded to date.

Spaghettification is sometimes called the noodle effect. We in astronomy have long heard about the intrepid astronaut who ventured too near a black hole’s event horizon (the point beyond which no light can escape) and was “stretched like spaghetti” by the hole’s powerful gravity. It’s not just that the hole’s gravity is strong. It’s that – because gravity is inversely proportional to distance, and because a black hole’s gravity is so exceedingly strong – the pull on the falling astronaut’s legs is substantially greater than the pull on his or her upper torso. Thus – as the astronaut approaches the event horizon, the point of no return (assuming they’re falling in feet first) – the astronaut is vertically stretched, as illustrated in the image below, until at last disappearing (again feet first) over the event horizon. This is spaghettification. 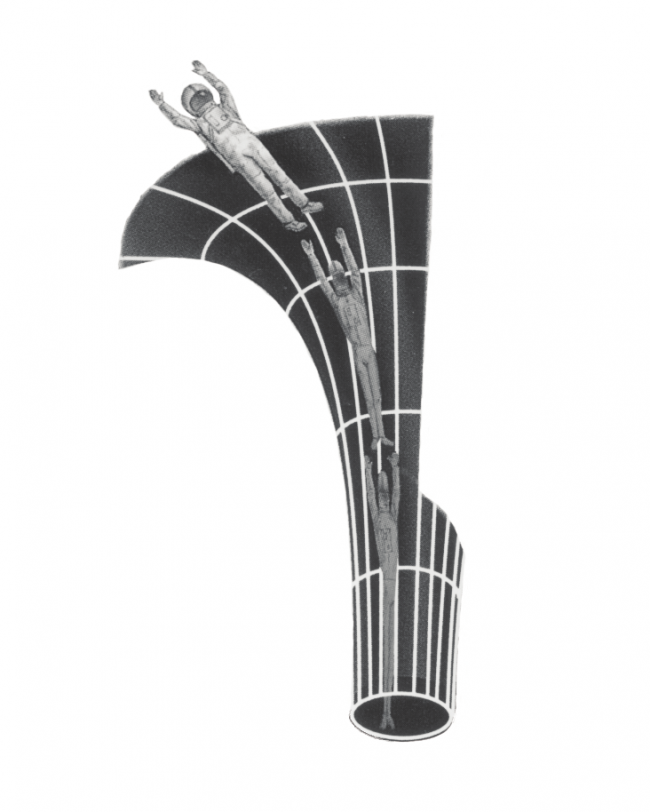 Astronaut falling into a black hole (schematic illustration of the spaghettification effect). It happens because – in the intense gravity field of a black hole – the pull on the astronaut’s feet is greater than the pull on his or her head. Image via NASA’s Imagine the Universe/ Wikimedia Commons.

Now shift your mind to a galaxy beyond our own Milky Way, whose center, like most galaxies studied so far, contains a supermassive black hole. If a star wanders too near the hole’s event horizon, that star – like the intrepid astronaut – is bound to be spaghettified.

Theoretically, all of this is very sound. But observing it with telescopes is difficult. This research came after a flash of light occurred close to a supermassive black hole in 2019. Astronomers at the European Southern Observatory’s Very Large Telescope and New Technology Telescope, both in Chile, observed the flash and labeled it AT2019qiz.

Over a six-month period, astronomers around the world made follow-up observations. 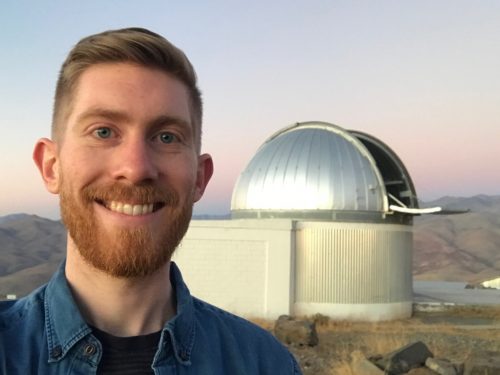 Matt Nicholl, about to start a night’s work in Chile. Image via Matt Nicholl.

After analyzing the data, the astronomers – led by Matt Nicholl at the University of Birmingham, U.K. – published their work October 12 in the peer-reviewed Monthly Notices of the Royal Astronomical Society. Nicholl said:

The idea of a black hole ‘sucking in’ a nearby star sounds like science fiction. But this is exactly what happens in a tidal disruption event.

Astronomer Edo Berger at the Harvard-Smithsonian Center for Astrophysics said:

… The star was torn apart with about half of its mass feeding – or accreting – into a black hole of 1 million times the mass of the sun, and the other half was ejected outward.

The European Southern Observatory said that, although the flares that occur from a star being spaghettified by a black hole are powerful and bright, up to now astronomers have had trouble investigating them. The reason is, they said, that this sort of event is often obscured by a curtain of dust and debris. Now astronomers have been able to shed light on what makes this curtain. Samantha Oates at the University of Birmingham said:

We found that, when a black hole devours a star, it can launch a powerful blast of material outwards that obstructs our view. 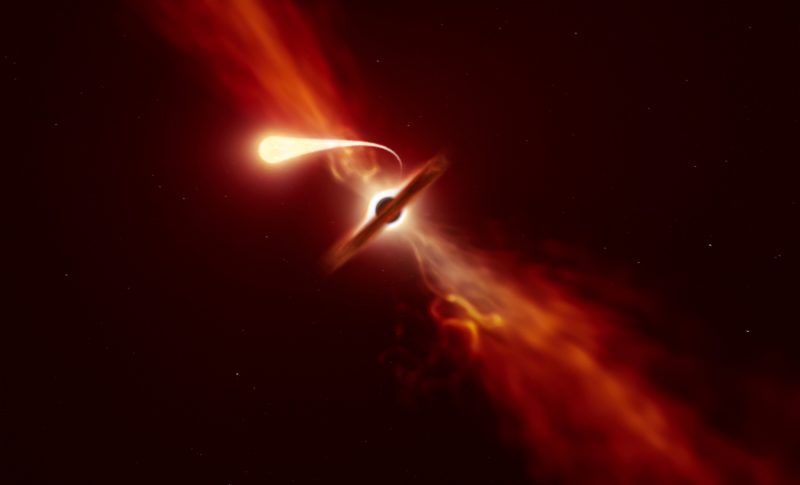 This illustration depicts a star (in the foreground) experiencing spaghettification as it’s sucked in by a supermassive black hole (in the background) during a ‘tidal disruption event’. In a new study, a team of astronomers found that when a black hole devours a star, it can launch a powerful blast of material outwards. Image via ESO.

That is, energy is released as the black hole gobbles up stellar material, propelling the star’s debris outwards. The astronomers said this discovery was possible because the tidal disruption event the team studied, AT2019qiz, was found just a short time after the star was ripped apart. Kate Alexander, NASA Einstein Fellow at Northwestern University, commented:

Because we caught it early, we could actually see the curtain of dust and debris being drawn up as the black hole launched a powerful outflow of material with velocities up to 10,000 km/second [6,000 miles/second].

This unique ‘peek behind the curtain’ provided the first opportunity to pinpoint the origin of the obscuring material and follow in real time how it engulfs the black hole.

Another dream from the minds of astronomers seen in reality! What next? 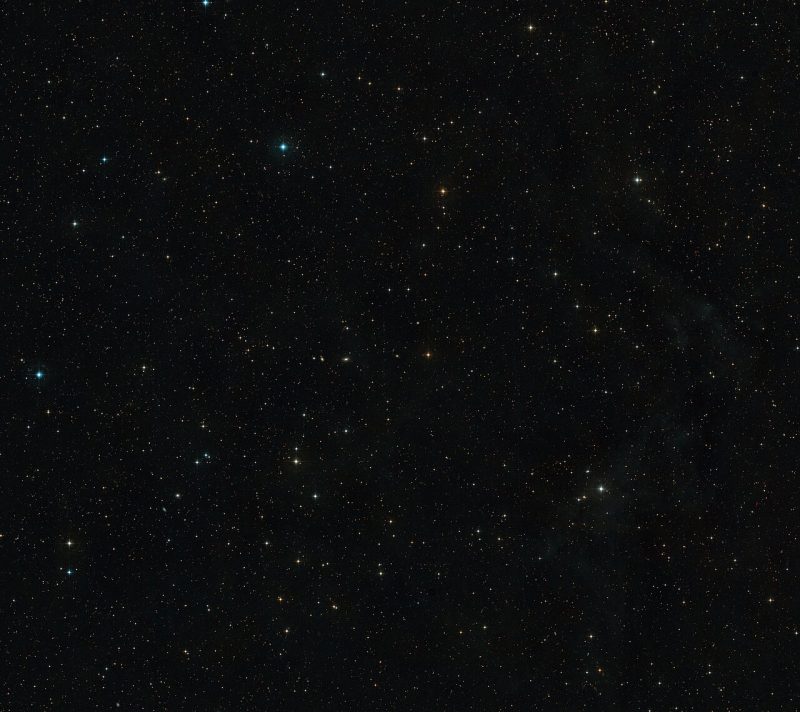 This image shows the sky around the location of AT2019qiz, at the very center of the frame. It’s located in our sky in the direction of the constellation Eridanus the River. Image via Davide De Martin/ ESO/ Digitized Sky Survey.

Bottom line: Spaghettification – aka the noodle effect – is the vertical stretching (and ultimate destruction) of any object that comes near a black hole’s event horizon. Astronomers have now witnessed a rare blast of light from a star being spaghettified. Astronomers would say the star died via a tidal disruption event. Meanwhile, the flare – followed for six months – was labeled AT2019qiz. It’s the closest such flare recorded to date at just over 215 million light-years from Earth.

Source: An Outflow Powers the Optical Rise of the Nearby, Fast-Evolving Tidal Disruption Event AT2019qiz