Astronomers may have glimpsed graphene in space, providing a clue about how our carbon-based selves and other life on Earth developed.

The honeycomb crystal lattice of graphene molecules is thought to look a bit like chicken wire, but the sheets are only one atom thick. (Wikimedia Commons)

Called graphene, this material is a cousin of sorts to the exotic molecule C60, otherwise known as Buckminsterfullerene or buckyballs. Graphene molecules are arranged in a honeycomb crystal lattice. They look a bit like chicken wire in flat sheets, but the sheets are only one atom thick. Graphene is sometimes said to be the thinnest substance known.

Graphene is talked about in the laboratory. It is thought to exist in nature, for example in soot. If confirmed in outer space, Spitzer’s discovery of graphene would be a first.

An international team of astronomers and biochemists made the tentative discovery of space graphene, led by Domingo Aníbal García-Hernández of the Instituto de Astrofísica de Canarias in Spain. Results of their study appear in the August 20, 2011 issue of The Astrophysical Journal Letters. 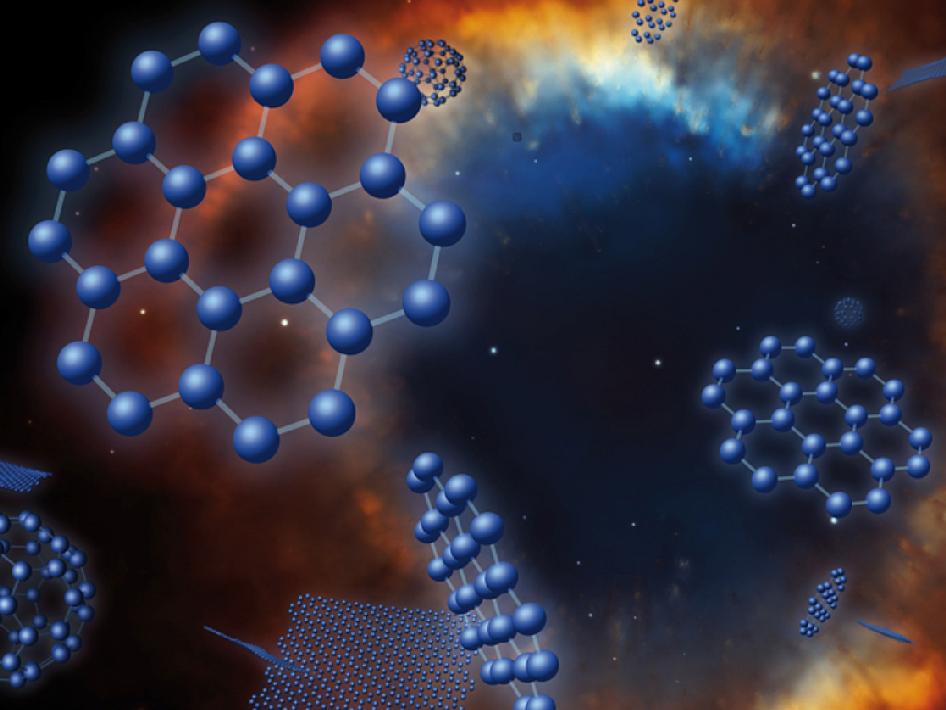 Artist’s illustration of graphene, buckyballs and C70 superimposed on an image of the Helix planetary nebula. These may be forming when shock waves generated by dying stars break apart hydrogen-containing carbon grains. Image Credit: IAC/NASA/NOAO/ESA/STScI/NRAO

Scientists first synthesized graphene in a lab in 2004. Subsequent research on its unique properties garnered the Nobel Prize in 2010. It has extraordinary strength and conducts electricity as well as copper does. Some think it’s the “material of the future,” with applications in computers, screens on electrical devices, solar panels and more.

Graphene in space isn’t going to result in any super-fast computers, but researchers are interested in learning more about how it is created. Understanding chemical reactions involving carbon in space may hold clues to how our own carbon-based selves and other life on Earth developed.

The Large Magellanic Cloud Planetary Nebula SMP48 was one of the star systems in the study. Image Credit: HST

Spitzer identified signs of the graphene in two small galaxies outside of our own called the Magellanic Clouds – specifically, in the material shed by dying stars, called planetary nebulae. The infrared-sensing telescope also spotted a related molecule, called C70 in the same region – marking the first detection of this chemical outside our galaxy.

C70 and graphene belong to the fullerene family, which includes molecules called buckyballs, or C60. These carbon spheres contain 60 carbon atoms arranged like a soccer ball, and were named after their resemblance to the architectural domes of Buckminister Fuller. C70 molecules contain 70 carbon atoms and are longer in shape, more like a rugby ball.

Spherical fullerenes are called buckyballs – spheres with carbon atoms arranged like a soccer ball. This graph illustrates a 70-fullerene arrangement. Via Wikimedia

Spitzer definitively detected both buckyballs and C70 in space for the first time in July 2010. It later spotted buckyballs – equivalent in mass to 15 full moons – in the Small Magellanic Cloud. These latter results demonstrated that, contrary to what was previously believed, fullerenes and other complex molecules could form in hydrogen-rich environments.

According to astronomers, the graphene, buckyballs and C70 might be forming when shock waves generated by dying stars break apart hydrogen-containing carbon grains.

Bottom line: An international team of astronomers and biochemists, led by Domingo Aníbal García-Hernández of the Instituto de Astrofísica de Canarias in Spain, used the Spitzer Space Telescope to observe what appears to be graphene in space. This discovery could provide a possible clue about how life on Earth developed. Results of the study appear in the August 20, 2011 issue of The Astrophysical Journal Letters.

Jan Cami on the largest molecule ever found in space