Astronomers have discovered young spiral arms in the center of the giant elliptical galaxy Centaurus A. The spiral arms formed shortly after a collision with another galaxy several hundred million years ago.

Elliptical galaxies are, usually, quite simple: massive spheres of old stars. But the giant galaxy Centaurus A (Cen A) hides a complex environment deep in its core. Recent observations reveal gaseous spiral arms, several thousand light-years across, swirling about the heart of the galaxy. The arms, never before seen in an elliptical galaxy, most likely formed after Cen A swallowed another galaxy sometime in the last few hundred million years. The discovery is another step towards understanding the formation and evolution of some of the most massive galaxies in the universe. 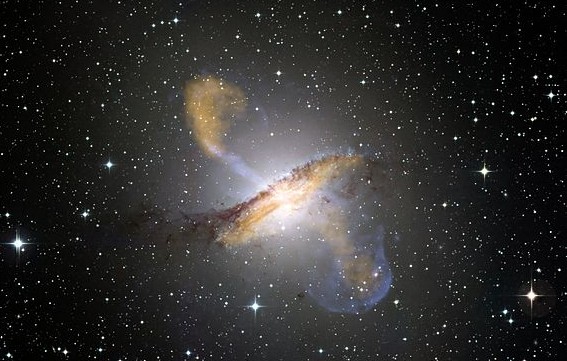 Centaurus A is the closest giant elliptical galaxy to Earth. This composite image shows the halo of stars, a dust lane from a recent collision with another galaxy, and gas jets driven by a supermassive black hole at the galaxy’s core. Orange maps radio wavelengths, blue is x-rays, and the stars and dust are visible light. Credit: ESO/WFI (Optical); MPIfR/ESO/APEX/A.Weiss et al. (Submillimetre); NASA/CXC/CfA/R.Kraft et al. (X-ray)

Cen A is known for being unusual. The most striking feature is a dark dust lane bisecting our view of its halo of stars. The dark band, filled with hydrogen gas and interstellar dust grains, are the remains of another galaxy torn apart by a close encounter with Cen A. The new observations use radio telescopes to peer through the thick dust clouds into the galaxy’s center. The images reveal a disk of carbon monoxide gas that formed spiral arms much like the grand spirals of our own Milky Way galaxy. 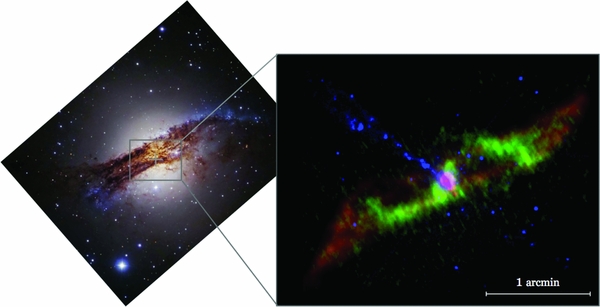 On the left is a visible light image of Cen A. On the right, a composite image zoomed in on the galaxy’s center revealing the spiral arms. The spiral arms are shown in green (coming from light emitted by carbon monoxide gas). Other features in the image are infrared light from dust and organic molecules (red) and x-ray emission (blue). The x-ray light comes from jets that are perpendicular to the plane of the galaxy. Credit: Espada, D. et al. 2012

Computer simulations indicate that the recent collision most likely delivered the gas to the galaxy’s core. Gas stripped off the cannibalized galaxy was funneled into the center while gravitational perturbations triggered the formation of spiral arms. As the arms sweep through the galaxy, they compress gas along their leading edges and spark new waves of star formation. While most elliptical galaxies have stopped making new stars, these spiral arms may be giving Cen A a new lease on life!

The results were published September 1, 2012 in The Astrophysical Journal Letters. 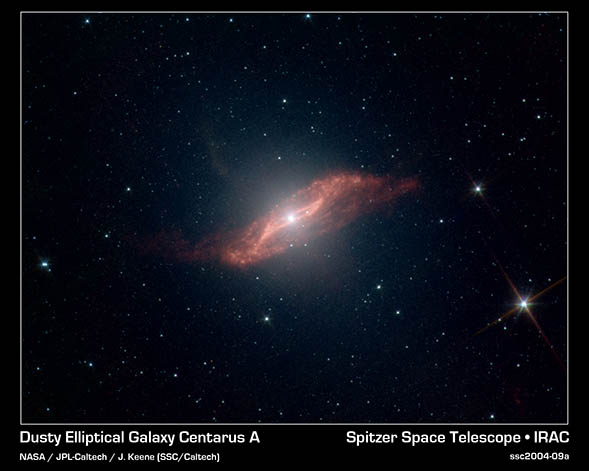 This infrared image from the Spitzer Space Telescope peers into the center of Cen A. The image shows the remains of a spiral galaxy consumed by Cen A sometime in the last few hundred million years. Recent observations from the Submillimeter Array reveal spiral arms of carbon monoxide gas within this disk. Credit: NASA / JPL-Caltech / J. Keene (SSC/Caltech)

Cen A is an ideal laboratory for understanding galaxy evolution. Sitting 12 million light-years away in the southern constellation Centaurus, the Centaur, Cen A is the closest giant elliptical galaxy to Earth. Both its proximity and size make Cen A the fifth brightest galaxy in the sky and therefore a popular target for amateur telescopes. In addition to its unusual dust bands, Cen A also hosts a supermassive black hole at its center. This massive beast contains the mass of 55 million suns and drives million light-year long jets that eject gas into intergalactic space at half the speed of light! 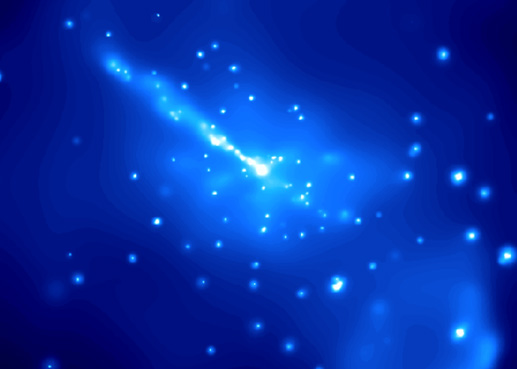 Cen A looks a lot different when using an x-ray telescope. Here, a jet of gas moving at half the speed of light is heated to millions of degrees by a supermassive black hole in the galaxy’s core. A sea of million-degree gas fills the galaxy while points of x-ray light reveal “x-ray binaries”: neutron stars or black holes ripping gas off nearby stellar companions. Credit: NASA/SAO/R. Kraft et al.

The spiral arms were observed at the Submillimeter Array (SMA), a network of radio telescopes located 4080 meters (13,386 feet) above sea level at the summit of Mauna Kea, Hawai’i. The high elevation places the SMA above most of the water vapor in Earth’s atmosphere that would otherwise interfere with observations like these. The SMA is a joint project between the Smithsonian Astrophysical Observatory and the Academia Sinica Institute of Astronomy and Astrophysics.

Bottom line: Astronomers using the Submillimeter Array radio telescopes have discovered young spiral arms in the center of the giant elliptical galaxy Centaurus A.  The spiral arms formed shortly after a collision with another galaxy several hundred million years ago. The discovery helps astronomers piece together the history of giant galaxies and understand how they form and evolve.