The black holes are central to quasars in the early universe. Researchers say the probability that their aligned spin is the result of chance is less than 1%. 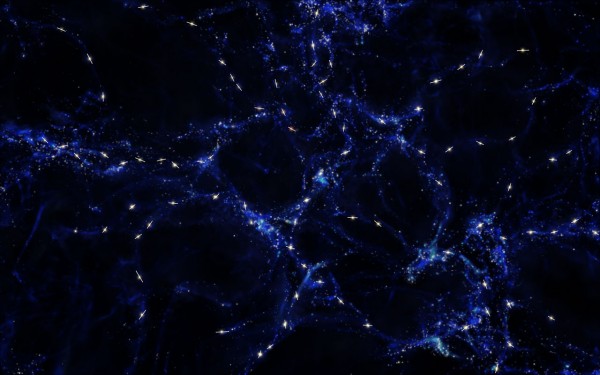 View larger. | Artist’s impression of mysterious alignments between the spin axes of quasars’ black holes and the large-scale structures that they inhabit. These alignments over billions of light-years are the largest known in the universe. Large-scale structure is shown in blue. Quasars marked in white with the rotation axes of their black holes indicated with a line. Picture is for illustration only and does not depict the real distribution of galaxies and quasars. Image via ESO/M. Kornmesser

The European Southern Observatory announced today (November 19, 2014) that its Very Large Telescope in Chile has revealed something downright odd. That is, the rotation axes of the central supermassive black holes in a sample of quasars are parallel to each other over distances of billions of light-years.

What’s more, found a team of European astronomers, the rotation axes of these quasars are often aligned with the vast structures they inhabit.

To understand how strange it is that spinning supermassive black holes might be aligned over vast distances, think back billions of years to the Big Bang, the event that set time in motion. The Big Bang sent matter and space hurtling outward in an expansion that has not stopped even today. The matter spreading expanding outward was essentially homogeneous – the same in all directions – but tiny fluctuations in this homogeneity caused matter to begin to clump. These clumps today are what make up the large-scale structure of the universe. The clumping gave rise to what we today see as superclusters of galaxies – which are collected in the “walls” of vast honeycomb-like structures – between whose walls lie vast voids apparently empty of galaxies.

So perhaps you see that – since the Big Bang – the quasars (early galaxies) were flung outward in space in a way that should have been random. There’s no apparent reason why a quasar in one part of space should have a central supermassive black hole whose spin axis is aligned with that of another quasar, billions of light-years away. And yet that is what the team found.

Damien Hutsemékers of the University of Liège in Belgium led a team that studied 93 quasars known to form huge groupings spread over billions of light-years. The 93 quasars are so far away that the astronomers are seeing them at a time when the universe was only about one-third of its present age. Hutsemékers said in a press release:

The first odd thing we noticed was that some of the quasars’ rotation axes were aligned with each other — despite the fact that these quasars are separated by billions of light-years.

The team then went further and looked to see if the rotation axes were linked, not just to each other, but also to the structure of the universe on large scales at that time. And, indeed, they were. The results indicate that the rotation axes of the quasars tend to be parallel to the large-scale structures in which they find themselves.

The researchers estimate that the probability that these alignments are simply the result of chance is less than 1%.

Note that the team could not see the rotation axes or the jets of the quasars directly. Instead, they measured the polarization of the light from each quasar and, for 19 of them, found a significantly polarized signal. The direction of this polarization, combined with other information, was used to deduce the angle of the black hole disk and hence the direction of the spin axis of the quasar. Dominique Sluse of the Argelander-Institut für Astronomie in Bonn, Germany and University of Liège said:

The alignments in the new data, on scales even bigger than current predictions from simulations, may be a hint that there is a missing ingredient in our current models of the cosmos.

Especially given the vast scale over which this discovery was made, that sounds like an understatement.

Bottom line: European astronomers using ESO’s Very Large Telescope in Chile find that the rotation axes of central supermassive black holes in a sample of quasars are parallel to each other over billions of light-years.