Just days before the Juno spacecraft’s arrival at Jupiter on July 4, astronomers unveiled these VLT images of Jupiter in the infrared. 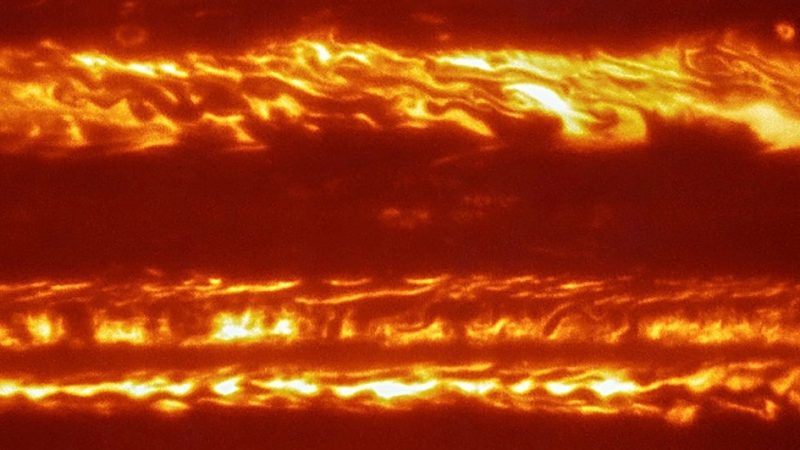 NASA’s Juno spacecraft is now nearing the giant planet Jupiter – largest planet in our solar system – preparing to enter orbit around it on July 4, 2016. It’ll be the first craft to orbit Jupiter since Galileo, which arrived in 1995 and spent eight years weaving among the planet’s moons, acquiring all sorts of data and many wonderful images. While waiting for Juno’s arrival, astronomers used the Very Large Telescope of the European Southern Observatory (ESO) to obtain new infrared images of Jupiter, such as those you see on this page. They released them this week (June 27, 2016) at the UK’s Royal Astronomical Society’s National Astronomy Meeting in Nottingham, England. ESO explained:

They are part of a campaign to create high-resolution maps of the giant planet. These observations will inform the work to be undertaken by Juno over the coming months, helping astronomers to better understand the gas giant ahead of Juno’s close encounter …

The campaign involved the use of several telescopes based in Hawaii and Chile, as well as contributions from amateur astronomers around the world. The maps don’t just give snapshots of the planet, but also reveal how Jupiter’s atmosphere has been shifting and changing in the months prior to Juno’s arrival. 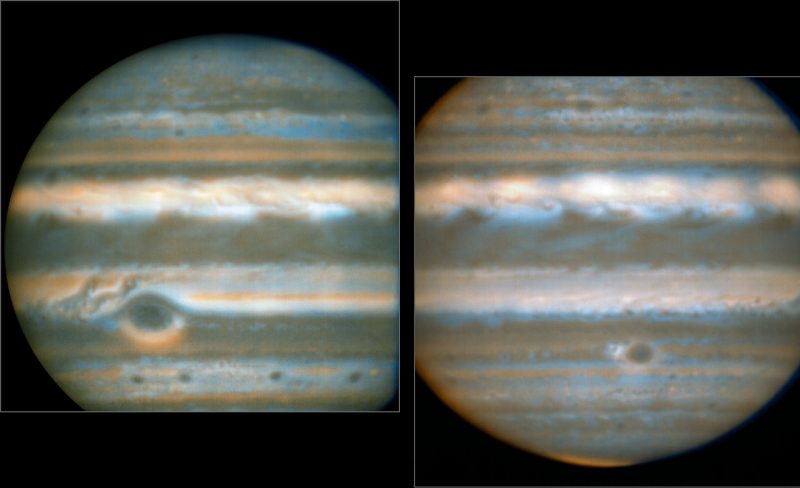 A team led by Leigh Fletcher of the University of Leicester presented the new infrared images. Fletcher said:

These maps will help set the scene for what Juno will witness in the coming months. Observations at different wavelengths across the infrared spectrum allow us to piece together a three-dimensional picture of how energy and material are transported upwards through [Jupiter’s] atmosphere. 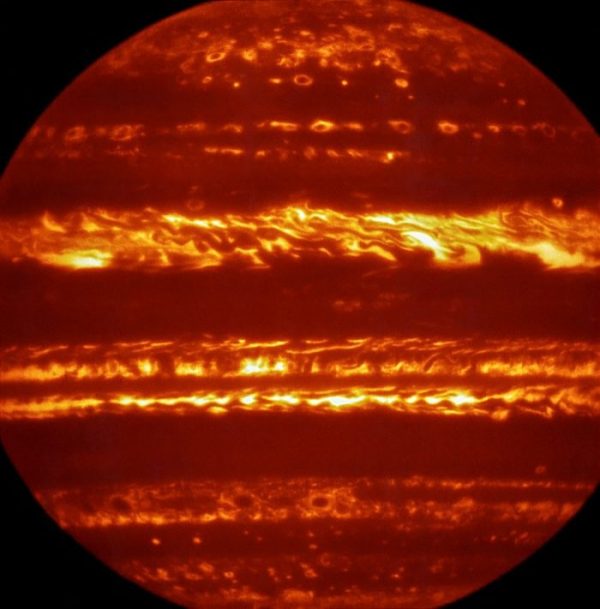 False-color infrared image of Jupiter, created by selecting and combining the best images obtained from many short exposures. Image via ESO.

Earth’s atmosphere is constantly shifting, which is why astronomers speak of good seeing or bad seeing on any particular night of observing. The steadiness of the atmosphere affects the quality of their observations.

To counter the shifting atmosphere, these astronomers used a special technique – called lucky imaging – to obtain these new VLT images. They took sequences of very short exposures of Jupiter, with an instrument called the VISIR (VLT Imager and Spectrometer for mid-Infrared), producing thousands of individual frames. The lucky frames, where the image is least affected by the atmosphere’s turbulence, are selected and the rest discarded.

Those selected frames are aligned and combined to produce the final images, like the ones shown here.

Read more about the new VLT images via ESO

8 days till #Jupiter orbit arrival. My team shares the collaboration and curiosity that made this mission a reality.https://t.co/23oVOx0tAU

#Jupiter ahead! My view of the giant planet + its 4 largest moons, as captured by JunoCam. https://t.co/EivKexPKbE pic.twitter.com/GbeC0MLUcm

Bottom line: While waiting for Juno’s arrival at Jupiter, astronomers used ESO’s Very Large Telescope to obtain new infrared images of Jupiter, such as those you see on this page. Juno goes into Jupiter orbit July 4, 2016!