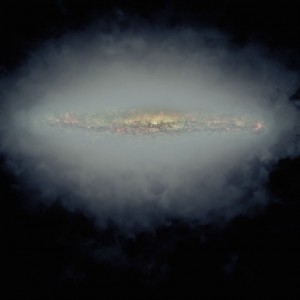 Composite image of an edge-on spiral galaxy with a radio halo produced by fast-moving particles in the galaxy’s magnetic field. In this image, the large, grey-blue area is a single image formed by combining the radio halos of 30 different galaxies, as seen with the Very Large Array. At the center is a visible-light image of one of the galaxies, NGC 5775, made using the Hubble Space Telescope. This visible-light image shows only the inner part of the galaxy’s star-forming region, outer portions of which extend horizontally into the area of the radio halo.

IMAGE CREDIT: Jayanne English (U. Manitoba), with support from Judith Irwin and Theresa Wiegert (Queen’s U.) for the CHANG-ES consortium; NRAO/AUI/NSF; NASA/STScI

Thank you! Your submission has been received!
Oops! Something went wrong while submitting the form.
END_OF_DOCUMENT_TOKEN_TO_BE_REPLACED