Speck from an asteroid

Viewed under a microscope, it resembles a human hair. But this is actually an extremely precious speck of dust – a tiny sample from the Itokawa asteroid, brought back to Earth by Japan’s Hayabusa mission. 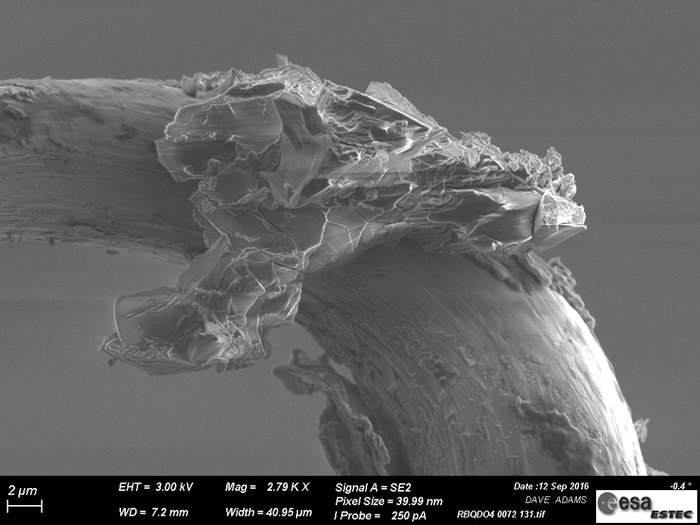 Speck of dust from an asteroid. Image via ESA.

The tiny object in the image above, viewed under a microscope, is no ordinary grain of rock. This speck of dirt is both extraterrestrial and precious. It’s a tiny sample from the Itokawa asteroid, retrieved by Japan’s Hayabusa mission.

Hayabusa – a Japanese word meaning peregrine falcon – was a robotic spacecraft, the first mission to return a sample of material from the surface of an asteroid to Earth for further analysis. Hayabusa was launched on May 9, 2003, and, although beset by many problems, landed on asteroid 25143 Itokawa in November 2005. It scraped up about 1,500 tiny grains of surface material and brought them back to Earth in June 2010.

Extremely precious, these Hayabusa grains have become the focus of scientific study around the world. Researcher Fabrice Cipriani is one of the scientists studying the asteroid grains. Here’s a video interview with Cipriani, produced by the European Space Agency:

Bottom line: Image of a grain of asteroid Itokawa.