SpaceX has been trying, but not succeeding, to land its Falcon 9 rocket upright at sea. Then, last month it succeeded on land. Soon, another sea-going attempt! 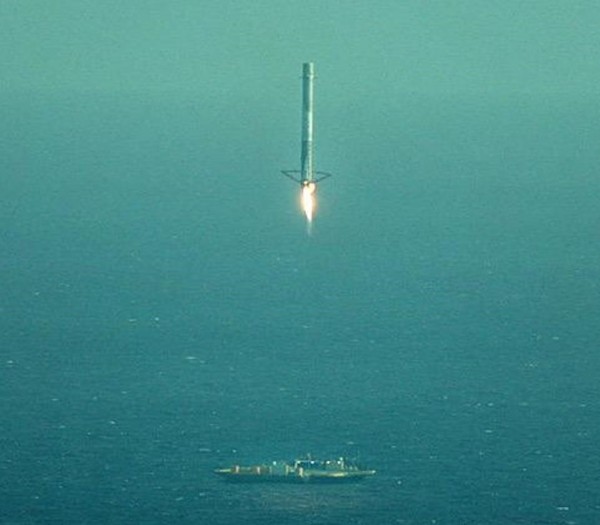 The first stage of a SpaceX Falcon 9 rocket descends toward a seagoing barge during an April, 2015, landing attempt in the Atlantic. Close, but no cigar that day. See video below. Image via SpaceX.

Last month, during a satellite-deployment mission, SpaceX launched its Falcon 9 rocket and – minutes later – brought the first stage of the rocket back to Earth for a successful upright landing in Florida. Prior to that feat, SpaceX had been trying unsuccessfully to land its rocket upright at sea. Later this month, SpaceX will try again for an upright sea landing.

NBC News confirmed a report tweeted Friday (January 8, 2016) by space journalist Charles Lurio that SpaceX will attempt to land the Falcon 9 on its barge in the Pacific Ocean during the Jason 3 mission launch from Vandenberg Air Force Base, California on January 17. See Lurio’s tweet below:

SpaceX will try to land the Falcon 9 first stage on a drone ship during the Jason-3 launch from Vandenberg AFB on January 17.

Upright landings of rocket first stages aren’t easy, but mastering them – and thereby being able to refurbish and reuse the rocket – is needed to bring down the cost of space travel.

Here’s what happened last April, the last time SpaceX tried a sea landing for its rocket. As you can see from the video below, the rocket descended on target toward the barge, then toppled in a fireball.

Elon Musk said later that the rocket tipped from what he called excess lateral velocity.

A static-fire engine test is scheduled on Monday [January 11], and the first opportunity for launch comes at 10:42 a.m. PT January 17.

A backup launch window is available the following day…

[If it succeeds, it’ll be] the first successful at-sea retro rocket landing in history, and the first West Coast rocket recovery.

By the way, the Jason 3 mission is sea-focused also. NOAA, NASA, the Centre National d’Etudes Spatiales (CNES), and European Organisation for the Exploitation of Meteorological Satellites (EUMETSAT) designed the Jason 3 satellite to study ocean surface waves, weather and climate.

The video below shows the successful upright landing in Florida on December 21, 2016. I could watch it all day …

And here’s a neat tweet from SpaceX founder Elon Musk, showing the December 21 launch and landing.

There and back again pic.twitter.com/Ll7wg2hL1G

Bottom line: Best of luck to the team at SpaceX for the Jason 3 launch on January 17, 2016, and another Falcon 9 upright sea landing attempt!