It was unmanned, and astronauts aboard the International Space Station still have 4 months of supplies. But it’s the third failed cargo mission to ISS in 8 months.

An unmanned SpaceX Falcon 9 rocket, carrying a Dragon spacecraft loaded with supplies for the International Space Station (ISS), exploded Sunday (June 28, 2015) shortly after liftoff from Cape Canaveral in Florida. The astronauts aboard ISS have about four months of supplies left, but the failure has dealt a blow to NASA, which has had three failed shipments of cargo to ISS in the past eight months.

The liftoff appeared normal until the rocket went supersonic – that is, began traveling faster than sound – at about 27 miles (43 km) up. That was at about 2 1/2 minutes into the flight. Watchers suddenly saw an expanding white cloud, then fiery plumes where the rocket was supposed to be. On NASA-TV, pieces could be seen falling into the Atlantic. 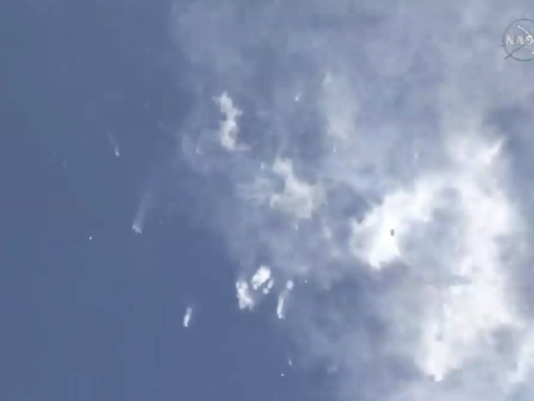 Tension could be heard in the voice of NASA commentator George Diller when he said:

We appear to have had a launch vehicle failure.

No astronauts were on board, but the Dragon spacecraft was carrying 5,200 pounds of space station cargo, including a first-of-its-kind docking port designed for future commercial crew capsules.

SpaceX founder and chief executive Elon Musk later said an over pressurization occurred in the liquid-oxygen tank of the Falcon 9 rocket’s upper stage.

Falcon 9 experienced a problem shortly before first stage shutdown. Will provide more info as soon as we review the data.

There was an overpressure event in the upper stage liquid oxygen tank. Data suggests counterintuitive cause.

This failed launch has far-reaching implications. NASA is faced with the problem of how to keep the International Space Station supplied and staffed. This is the second ISS cargo shipment to fail in a row. In April, a Russian supply ship spun out of control and later burned up upon re-entry.

The following is a statement from NASA Administrator Charles Bolden, issued shortly after Sunday’s launch failure:

We are disappointed in the loss of the latest SpaceX cargo resupply mission to the International Space Station. However, the astronauts are safe aboard the station and have sufficient supplies for the next several months. We will work closely with SpaceX to understand what happened, fix the problem and return to flight. The commercial cargo program was designed to accommodate loss of cargo vehicles. We will continue operation of the station in a safe and effective way as we continue to use it as our test bed for preparing for longer duration missions farther into the solar system.

A Progress vehicle is ready to launch July 3, followed in August by a Japanese HTV flight. Orbital ATK, our other commercial cargo partner, is moving ahead with plans for its next launch later this year.

SpaceX has demonstrated extraordinary capabilities in its first six cargo resupply missions to the station, and we know they can replicate that success. We will work with and support SpaceX to assess what happened, understand the specifics of the failure and correct it to move forward. This is a reminder that spaceflight is an incredible challenge, but we learn from each success and each setback. Today’s launch attempt will not deter us from our ambitious human spaceflight program.