With one minute remaining, SpaceX aborts today’s launch of Falcon 9

The soonest Space X can try again to launch Falcon 9 and the Dragon spacecraft – on a mission to resupply the International Space Station – is Friday.

At the last moment, SpaceX aborted its launch this morning (January 6, 2015) of a resupply mission to the International Space Station. SpaceX’s unmanned Falcon rocket was supposed to blast off before sunrise Tuesday – providing a spectacular sky view for spectators along Florida’s space coast – but flight controllers stopped the countdown with just over one minute remaining. The issue reported is a thrust vector control actuator on the rocket’s second stage. The soonest SpaceX can try again is Friday, January 9, and a launch is planned for that time at 5:09 a.m. EST (1009 UTC), pending resolution of the issue.

Today’s launch was originally planned for before the Christmas holiday, but then re-scheduled because of a problem with routine test-firing of the engine. 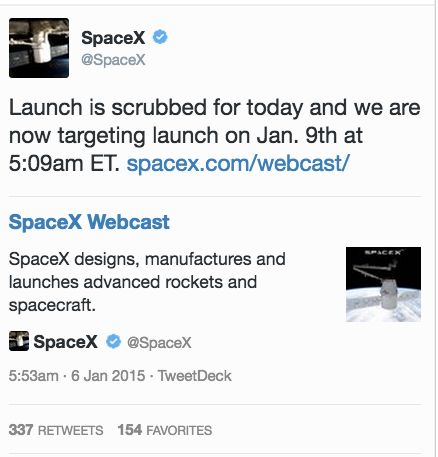 This would have been SpaceX’s fifth mission to ISS. It would have been the first-ever attempt at landing the first stage of the two-stage rocket on a floating platform in the Atlantic Ocean, about 200 miles off the coast of Florida, a step toward making rockets more reusable and driving down the cost of spaceflight.

The actuator that halted the launch was central to the landing mission. If the team had not stepped in to manually abort the launch, the actuator would have triggered an automatic abort.

Space engineers are always prudent, but perhaps even more so for this planned launch, following the spectacular explosion during attempted launch the Orbital Sciences Antares rocket on October 28, and the explosion and crash of Virgin Galactic’s SpaceShipTwo rocket plane – a craft intended to carry tourists on suborbital flights – during a test flight on October 31.

SpaceX is ensuring that all measures are carefully rechecked to maximize the possibilities of a launch success. 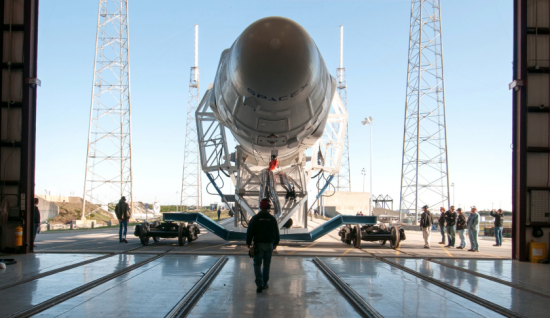 Bottom line: SpaceX halted today’s launch (January 6, 2015) of its Falcon 9 rocket and Dragon spacecraft, due to an issue with an actuator on the rocket’s second stage. The mission was meant to resupply the International Space Station. It is now planned for launch on Friday, January 9.