SpaceX hopes to launch to International Space Station on March 20

SpaceX wants to launch the first commercially built spacecraft to the International Space Station on March 20, 2012, but might push back the launch to April.

Space Exploration Technologies Corporation (SpaceX) is aiming to complete the first launch of a commercially built craft to the International Space Station (ISS) on March 20, 2012. But the launch might be pushed back to early April, 2012, ISS program manager Mike Suffredini announced in a press briefing on February 2. The original launch date was set for February 7, but the schedule proved to be too tight. These announcements come about a year after SpaceX’s historic first recovery of a commercial craft from orbit, after their Dragon spacecraft successfully orbited Earth two times in late 2010.

The first SpaceX flight to ISS will be a demonstration flight, launching out of Cape Canaveral in Florida. During the briefing, Suffredini said:

I don’t think they’re going to make March 20. I think it will be early April. We won’t fly until we’re ready . . . . There is not much margin in their schedule and on a new vehicle schedules without margins tend to move to the right.

SpaceX’s Dragon craft is capable of carrying cargo and, eventually, crew to the ISS, a pressing need for the United States now that the shuttle program has ended. The Dragon is designed to be reusable, as the shuttles were. The company is also aiming to to develop the first-ever reusable launch vehicle. Dragon will be launched on SpaceX’s Falcon 9 rocket. It was the Falcon 9 that launched SpaceX’s Dragon craft on December 8, 2010, for its successful two orbits of Earth and history-making first commercial recovery of a craft from orbit. 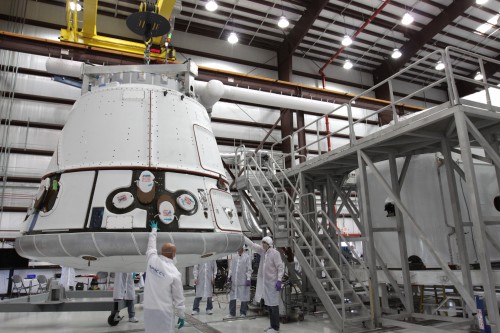 Dragon is lifted inside a processing hangar at Cape Canaveral. Credit: NASA/Kim Shiflett

Though development of the ISS launch is behind schedule, Suffredini expressed confidence in the way things are proceeding. And on February 1, SpaceX successfully test fired its SuperDraco engine, an advanced version of the Draco engine currently used on Dragon. The SuperDraco is part of Dragon’s launch-escape system, and, because it is not jettisoned like other escape systems, allows astronauts to escape to safety at any point during a launch, not just the first few minutes.

Falcon 9 lifts off for its first flight. Credit: SpaceX/Chris Thompson

SpaceX currently has a $1.6 billion contract with NASA’s Commercial Orbital Transportation Services (COTS) program, representing 12 flights to the ISS. More flights can be added and the contract can be increased to up to $3.1 billion. The company’s current launch manifest calls for two launches to resupply the ISS in 2012, two in 2013, three in 2014, and five in 2015. SpaceX is also planning to use Dragon to conduct in-orbit science independent of NASA, in a program called Dragon Lab.

Bottom line: Space Exploration Technologies Corporation (SpaceX) hopes to launch the first commercially built craft to the International Space Station (ISS) on March 20, 2012. But the launch might be pushed back to early April, 2012. These announcements come about a year after SpaceX’s historic first recovery of a commercial craft from orbit, after their Dragon spacecraft successfully orbited Earth two times in late 2010. Dragon will be launched to ISS on SpaceX’s Falcon 9 rocket. A new launch-escape system and SuperDraco engine are being developed for future missions.