These stars produce X-rays at 100 times our sun’s peak levels. They spin so fast they’ve been squashed into pumpkin-like shapes.

Astronomers have discovered a batch of rapidly spinning stars that produce X-rays at more than 100 times the peak levels ever seen from our sun. The stars spin so fast they’ve been squashed into pumpkin-like shapes. Astronomers think they’re the result of close binary systems where two sunlike stars merge.

The most extreme member of the group, named KSw 71, is more than 10 times larger than the sun, rotates in just 5.5 days, and produces X-ray emission 4,000 times greater than the sun does at solar maximum.

Steve Howell is a senior research scientist at NASA’s Ames Research Center in Moffett Field, California, and leader of the discovery team. Howell said in a statement:

These 18 stars rotate in just a few days on average, while the sun takes nearly a month. The rapid rotation amplifies the same kind of activity we see on the sun, such as sunspots and solar flares, and essentially sends it into overdrive. 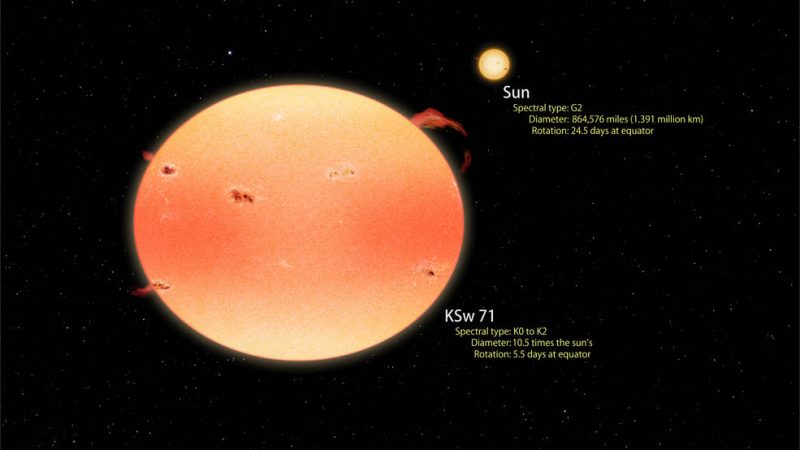 This artist’s concept illustrates how the most extreme “pumpkin star” found by Kepler and Swift compares with the sun. Both stars are shown to scale. KSw 71 is larger, cooler and redder than the sun and rotates four times faster. Rapid spin causes the star to flatten into a pumpkin shape, which results in brighter poles and a darker equator. Rapid rotation also drives increased levels of stellar activity such as starspots, flares and prominences, producing X-ray emission over 4,000 times more intense than the peak emission from the sun. KSw 71 is thought to have recently formed following the merger of two sun-like stars in a close binary system. Image via NASA’s Goddard Space Flight Center/Francis Reddy.

The astronomers found these rare stars, using observations from NASA’s Kepler and Swift missions from May 2009 to May 2013, in a patch of the sky comprising parts of the constellations Cygnus and Lyra.

Kepler measured the brightness of more than 150,000 stars in this region to detect the regular dimming from planets passing in front of their host stars.

A paper detailing the findings will be published in the November 1, 2016 edition of the Astrophysical Journal and is now available online.

Bottom line: Using observations from NASA’s Kepler and Swift missions, a team of astronomers has discovered 18 rapidly spinning stars that produce X-rays at more than 100 times the peak levels ever seen from our sun. The stars spin so fast they’ve been squashed into pumpkin-like shapes.