Earth’s atmosphere is leaking into space, too, but only very, very slowly. Meanwhile, Mars is thought to have lost much of its atmosphere already.

A team of scientists with the MAVEN spacecraft, which has been orbiting Mars since September 21, said this week (October 14, 2014) that – by observing all of the products of water and carbon dioxide breakdown in the Red Planet’s atmosphere – they will be able to characterize the processes that drive atmospheric loss on Mars.

That’s right. Mars atmosphere is escaping, just as Earth’s is. On Earth, this gradual leaking of our atmosphere back to space is exceedingly tiny, only about three kilograms of hydrogen and 50 grams of helium (the two lightest gases) per second. Meanwhile, Mars – which is smaller than Earth and thus has weaker gravity – is thought to have lost a large percentage of its atmosphere to space. It’s a goal of the MAVEN (Mars Atmosphere and Volatile Evolution) spacecraft to help solve the mystery of how Mars lost so much of its atmosphere.

These early ultraviolet images from MAVEN – which is still lowering its orbit and testing its instruments – show tenuous oxygen, hydrogen, and carbon coronas surrounding the planet. NASA says MAVEN has already yielded a comprehensive map of highly-variable ozone in the atmosphere underlying the coronas.

Plus MAVEN has provided scientists with their first look at a storm of energetic solar particles at Mars, which are thought to be one possible mechanism for driving atmospheric loss. Read more about MAVEN’s early observations at Mars here.

Bruce Jakosky, MAVEN Principal Investigator at the University of Colorado, Boulder said in a press release:

All the instruments are showing data quality that is better than anticipated at this early stage of the mission. All instruments have now been turned on — although not yet fully checked out — and are functioning nominally. It’s turning out to be an easy and straightforward spacecraft to fly, at least so far. It really looks as if we’re headed for an exciting science mission.

The mission aims to start full science gathering in early to mid-November. 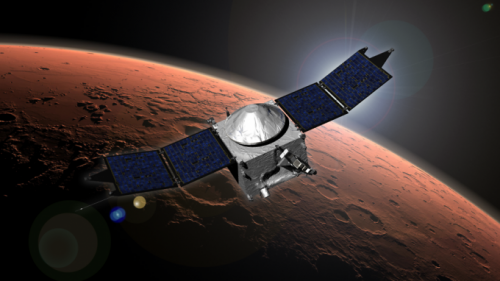 Artist’s concept of MAVEN spacecraft at sunrise above Mars, via Colorado.edu

Bottom line: Earth’s atmosphere is gradually leaking into space, too, but the leakage from Earth is tiny. Meanwhile, Mars is thought to have lost much of its atmosphere. One goal of the MAVEN spacecraft at Mars is to find out why.