Fruit flies sent as eggs on a 12-day mission aboard the Space Shuttle Discovery had a key part of their immune system weakened, as they grew in space. 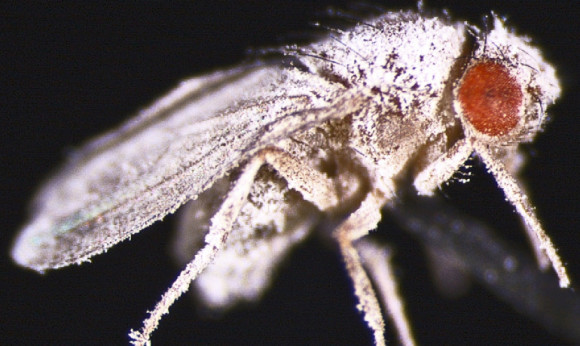 A Drosophila fly infected with fungus. After being raised in space, fruit flies are unable to fight off fungal infections because of defects in their immune system. Image via Deborah Kimbrell

Fruit flies, which take about 10 days to develop into adults, were sent into space as eggs on a 12-day mission aboard the Space Shuttle Discovery. After they returned to Earth, researchers tested their responses to two different infections and found that their immune systems were weaker than expected.

It’s well established that spaceflight affects immune responses, according Deborah Kimbrell, a researcher in the department of molecular and cellular biology at the University of California, Davis, who led the study published in PLOS ONE. Kimbrell and colleagues say their study was the first of Drosophila fruit flies’ immune response to gravity, using first hypergravity (increased gravity) and then microgravity, the decreased gravity of spaceflight.

Drosophila flies share many fundamentals of the immune system with mammals such as mice and humans.

After being raised in space, the flies were tested for two infections: a fungus that flies fight off through a pathway mediated by the Toll receptor and a bacterial infection that flies resist through a gene called Imd (“immune deficiency”). Both the Toll and Imd pathways have counterparts in humans and other mammals. In fact, the 2011 Nobel Prize in physiology and medicine was awarded for discovery of Toll receptor activation of innate immunity in flies and mammals.

While the response through the Imd pathway was robust, the Toll pathway was “non-functional” in space-raised flies, Kimbrell said.

In Earth-based experiments, when flies were tested in a centrifuge under hypergravity conditions, their resistance to the fungus was improved, suggesting that their Toll pathway was boosted.

However, for the mutant yuri gagarin, which lacks normal responses to gravitational fields, resistance was the same at normal and hypergravity, further demonstrating a link between gravity and the immune response.

Future spacecraft designed for long missions could already include centrifuges that crew could use to keep up bone and muscle mass: it turns out that this might also have a beneficial effect on astronauts’ immune systems, Kimbrell said.

How does microgravity affect the immune system? Researchers have two hypotheses in mind, which are testable both in humans and flies:

– Microgravity interferes with the behavior of proteins outside the cell—an area that is more important for Toll than for Imd signaling.