A new and tantalizing hint of mysterious dark matter has been found by the Alpha Magnetic Spectrometer particle detector aboard the International Space Station. 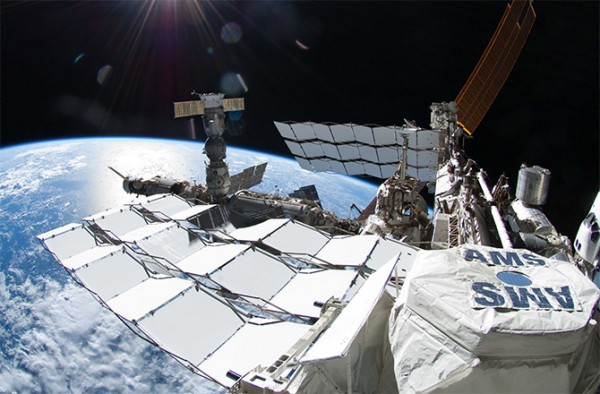 The hint of dark matter came from this instrument, the Alpha Magnetic Spectrometer (AMS-02) aboard the International Space Station. Image via NASA

One of the great discoveries of the coming century will be the direct detection of dark matter. This mysterious substance, thought to compose some 23% of the mass of our universe, is currently one of the most-sought substances in existence, the source of thousands of scientific papers and endless hours of speculation over the last half of the last century, despite the fact that it has not yet been directly detected. Now an analysis of 41 billion cosmic rays striking a state-of-the-art instrument called the Alpha Magnetic Spectrometer (AMS) particle detector aboard the International Space Station (ISS) may have come close to detecting dark matter. It shows:

… an unexpected excess of cosmic-ray antielectrons (positrons) relative to electrons.

One possible explanation is that:

…the positrons are being created in annihilations of dark matter particles.

This is the first experimental observation of the positron fraction maximum after half a century of cosmic rays experiments.

The researchers say data at higher energy will be needed to confirm a dark matter origin. Their paper was published yesterday (September 18, 2014) in Physical Review Letters.

Overall, dark energy is thought to contribute 73 percent of all the mass and energy in the universe. Another 23 percent is dark matter, which leaves only 4 percent of the universe composed of regular matter, such as stars, planets and people. Pie chart via NASA

The Alpha Magnetic Spectrometer (AMS) experiment is a $2 billion, state-of-the-art particle detector that is constructed, tested and operated by an international team composed of 60 institutes from 16 countries and organized under United States Department of Energy (DOE) sponsorship.

It is attached to the International Space Station – carried there by the second-to-last Space Shuttle mission – and it has been in operation since 2011.

AMS is looking for evidence of dark matter neutralinos. If these dark matter particles exist, they should collide with one another and release charged particles that AMS can detect.

While the AMS discovery is not definitive proof of dark matter, it does “point in the right direction,” the reseachers say.

They say they still need to rule out astrophysical sources such as pulsars, as the source of the results seen in the AMS experiment.

The AMS is not the only instrument on the hunt for dark matter. The Large Hadron Collider (LHC) has been involved in the search. This past summer (July 2014), the U.S. Department of Energy’s Office of High Energy Physics and National Science Foundation’s Physics Division jointly announced their support for three experiments in the next generation of the search for dark matter. They will be at least 10 times as sensitive as the current crop of dark matter detectors.

Still, for now, this recent detection by the AMS experiment has the physics and astronomy worlds abuzz. CERN Director-General Rolf Heuer said:

With AMS and with the LHC to restart in the near future at energies never reached before, we are living in very exciting times for particle physics as both instruments are pushing boundaries of physics.

Read more about AMS and its hint at dark matter detection, from CERN