The Magellanic Stream – 300,000 light-years long – arches around our Milky Way. It’s too faint and tenuous to study directly, so astronomers probed it by looking to distant quasars. 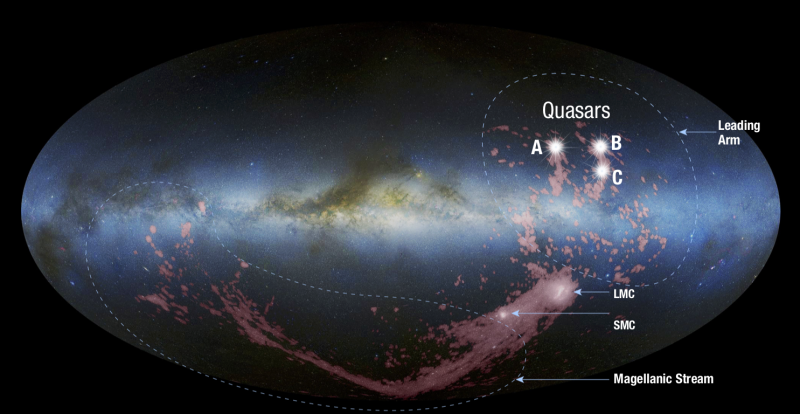 The Magellanic Stream is a faint and diffuse cloud of gas, long associated with the Large and Small Magellanic Clouds, dwarf galaxies orbiting our Milky Way. These astronomers used distant quasars, here labeled A, B and C, to understand the source of the gas cloud. Image via UW-Madison/STScI. Read more about this image.

Astronomers said on March 23, 2018, that they’ve now confirmed the source of a huge cloud of gas arching around our Milky Way galaxy. The gas cloud is known as the Magellanic Stream. It’s galaxy-sized, 300,000 light-years long, in contrast to our Milky Way’s 100,000 light-year diameter. The cloud appears to be shunted away from the Large and Small Magellanic Clouds, two of the many dwarf galaxies orbiting our Milky Way. But which of the Clouds is the source of the stream of gas? Now, by scrutinizing the chemical makeup of the gas, astronomers say they’re confident one branch of the cloud, sometimes called the Leading Arm, is coming from the Small Magellanic Cloud.

The gravity of the Large Magellanic Cloud has apparently tugged the gas stream from its smaller companion. The new study is published in the peer-reviewed Astrophysical Journal.

The gas in the Magellanic Stream is difficult to study directly because it’s so faint and tenuous. Astronomers seeking the source of the gas don’t look at the gas directly.

Instead, they aim toward distant quasars located behind the Magellanic Stream. As the quasars’ light pierces the gas, trace amounts of various elements in the gas absorb specific wavelengths of the quasar-light. The team used spectroscopic analysis of the quasars’ light to reveal chemical abundances in the gas cloud. The measurements came from the Cosmic Origins Spectrograph on the Hubble Space Telescope as well as spectrographs on the Green Bank Telescope in Green Bank, West Virginia.

The astronomers on the new study credit Blair Savage, an emeritus professor of astronomy at the University of Wisconsin-Madison, for laying the groundwork that led to the current understanding of the Magellanic Stream. Savage worked for decades to understand the gas complexes around the Milky Way, including the Magellanic Stream. Six of the astronomers on the current paper – now at various institutions including the Space Telescope Science Institute and University of Wisconsin-Madison – were originally recruited by Savage to tackle the problem during their training at UW-Madison.

The authors of the new study said knowledge about the Magellanic Stream will help astronomers refine their models of how the Large and Small Magellanic Clouds orbit our Milky Way. Elena D’Onghia of University of Wisconsin-Madison, one of the new study’s authors, commented in a statement:

From the Southern Hemisphere, the Magellanic Clouds appear in the sky as fuzzy offshoots of the starlit trail of the Milky Way. The gas cloud cannot be perceived with the unaided eye, despite the fact that it contains the mass of several hundred million suns.

Astronomers say this gas that might someday rain down on our galaxy and spark new star formation. 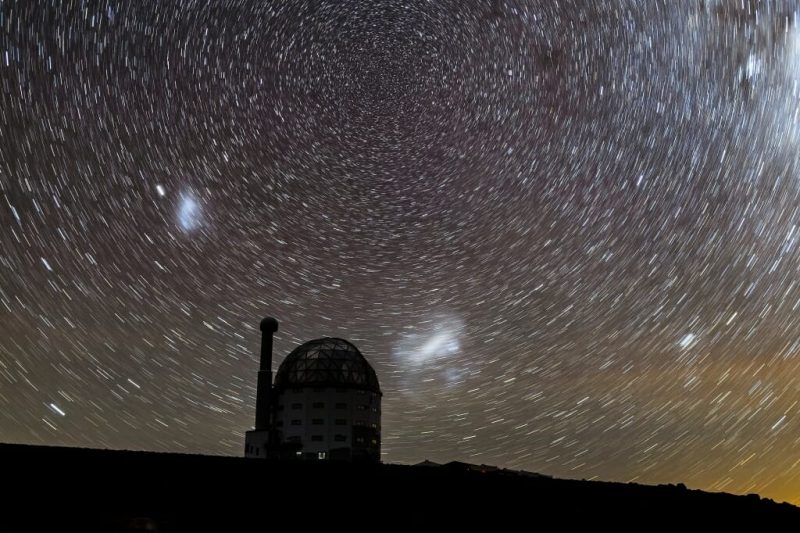 The Large and Small Magellanic Clouds (at bottom) are seen in this 8-minute time exposure, above the Southern African Large Telescope. Image via Jeff Miller/ UW-Madison.

Bottom line: Astronomers have been working for decades to gain insights into the vast gas cloud, called the Magellanic Stream, that arches around our Milky Way galaxy. They now say the Small Magellanic Cloud is the source of the Leading Arm of the Stream.

Source: Chemical Abundances in the Leading Arm of the Magellanic Stream