Did our solar system form in a bubble around a giant star?

And now … a big bubble theory. Scientists are discussing the possibility that our solar system formed in wind-blown bubbles around a giant, long-dead star. 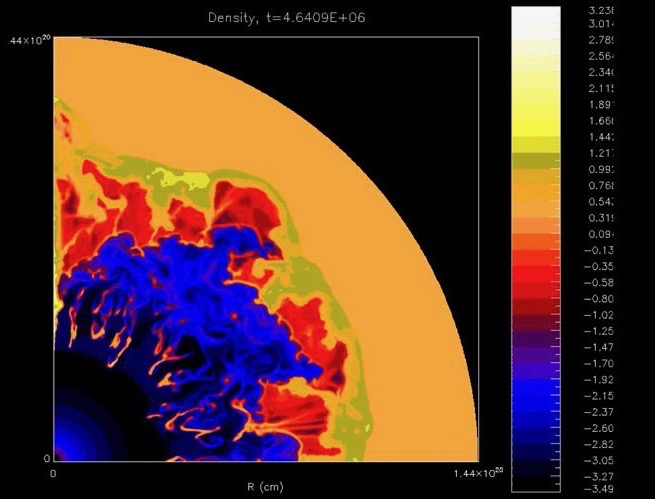 This simulation shows how bubbles form over the course of 4.7 million years from the intense stellar winds off a massive star. UChicago scientists postulated how our own solar system could have formed in the dense shell of such a bubble. Image via V. Dwarkadas/ D. Rosenberg/ UChicagoNews.

For decades, astronomers have accepted the theory that our sun and planets – our solar system – formed about 4.6 billion years ago from a spinning cloud of gas and dust. In recent years, they’ve added to that idea a triggering mechanism: a nearby supernova, or exploding star. A nearby supernova might have triggered a gravitational collapse in the cloud of gas and dust, ultimately leading to our sun and its planets. But questions have remained, and now University of Chicago scientists have described a new comprehensive theory, which can explain some of the mysteries. According to their theory, our solar system might have formed in the wind-blown bubbles around a giant, long-dead Wolf-Rayet star.

Their work was published December 22, 2017 in the peer-reviewed Astrophysical Journal.

Wolf-Rayet stars are a type of star – more than 40 to 50 times the size of our own sun – that aren’t supernovae yet, but will likely become supernovae in the future. The new scenario by the UChicago scientists starts with this type of star, which, their statement said:

… burns the hottest of all stars, producing tons of elements which are flung off the surface in an intense stellar wind. As the Wolf-Rayet star sheds its mass, the stellar wind plows through the material that was around it, forming a bubble structure with a dense shell.

Geophysicist Nicolas Dauphas at UChicago is a co-author on the new study. He said:

The shell of such a bubble is a good place to produce stars.

That’s because dust and gas become trapped inside where they can condense into stars, and presumably solar systems like the one in which we live.

These scientists estimate that 1 percent to 16 percent of all sunlike stars could be formed in the bubbles produced by Wolf-Rayet stars.

This setup differs from the supernova hypothesis in order to make sense of two isotopes that occur in strange proportions in the early solar system, compared to the rest of the galaxy. Meteorites left over from the early solar system tell us there was a lot of aluminium-26. In addition, studies, including a 2015 one by Dauphas and a former student, increasingly suggest we had less of the isotope iron-60.

This brings scientists up short, because supernovae produce both isotopes.

[The production of both elements by supernovae] begs the question of why one was injected into the solar system and the other was not.

That’s why these scientists turned to the idea of Wolf-Rayet stars. They are well-studied stars, known to release lots of aluminium-26, but no iron-60. Dwarkadas said

The idea is that aluminum-26 flung from the Wolf-Rayet star is carried outwards on grains of dust formed around the star. These grains have enough momentum to punch through one side of the shell, where they are mostly destroyed—trapping the aluminum inside the shell.

Eventually, part of the shell collapses inward due to gravity, forming our solar system, these scientists suggest.

As with all new theories, this one will have to undergo scrutiny by other scientists. 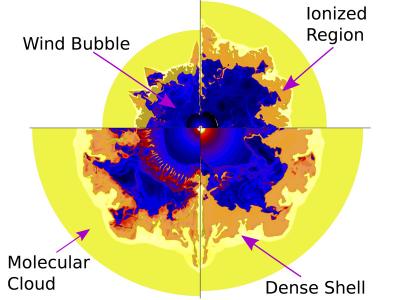 Slices of a simulation showing how bubbles around a massive star evolve over the course of millions of years (moving clockwise from top left). Image via V. Dwarkadas/ D. Rosenberg/ UChicagoNews.

Bottom line: A new theory suggests the possibility that our solar system formed in wind-blown bubbles around a giant, long-dead Wolf-Rayet star.

Source: Triggered star formation inside the shell of a Wolf-Rayet bubble as the origin of the solar system.