A mid-level flare burst from the sun on April 18. This image, from NASA’s Solar Dynamics Observatory. shows the flare as a bright spot on the sun. 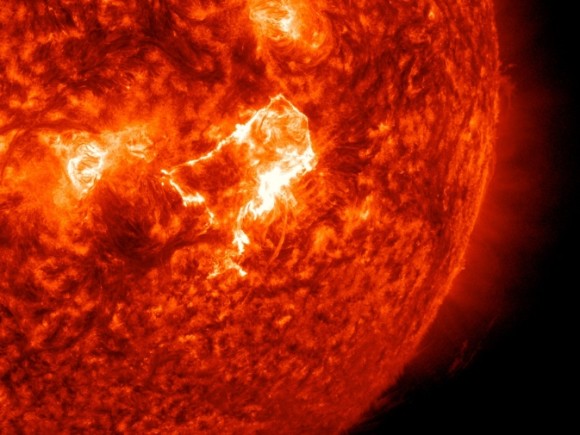 The sun emitted a mid-level solar flare, peaking at 9:03 a.m. EDT on April 18, 2014, and NASA’s Solar Dynamics Observatory captured this image of the event. Solar flares are powerful bursts of radiation. Harmful radiation from a flare cannot pass through Earth’s atmosphere to physically affect humans on the ground, however – when intense enough – they can disturb the atmosphere in the layer where GPS and communications signals travel.

This flare is classified as an M7-class flare. M-class flares are one step below the most intense flares, which are designated as X-class.