SOHO – Solar and Heliospheric Observatory – is the greatest comet-discoverer of all time. It has found 3,000 comets … but our sun has destroyed nearly all of them.

The Solar and Heliospheric Observatory – SOHO – orbits the sun at 932,000 miles (1.5 million km) from Earth. The space observatory has just discovered its 3000th comet — more than any other spacecraft or astronomer. NASA released a new video about SOHO, which you’ll find above, on October 25, 2015. The video explains that just about all of SOHO’s comets have been destroyed.

That’s because the overwhelming majority of SOHO’s comet discoveries are sungrazers, belonging to the Kreutz comet family. The video explains:

Kreutz sungrazers are fragments from the breakup of a single giant comet thousands of years ago. They get their name from 19th century German astronomer Heinrich Kreutz, who studied them in detail. On average, a new member of the Kreutz family is discovered every three days. Unfortunately for these small comets, their orbits swoop perilously close to the sun.

Karl Battams at the Naval Research Labs in Washington, D.C. has overseen the SOHO comet-sighting website since 2003. He said:

There’s only one Kreutz comet that made it around the sun – Comet Lovejoy. And we are pretty confident it fell apart a couple of weeks afterwards.

Solar scientists launched SOHO in 1995. It’s a joint project of the European Space Agency (ESA) and NASA. Before SOHO, spacecraft had discovered only a dozen or so comets from space. Meanwhile, since 1761, about 900 had been discovered from the ground. Scientists study the SOHO comets for many reasons. For example, they can use them to learn about the sun’s magnetic field. The powerful magnetic field of our local star buffets the comets’ tails, causing them to bend and swing, revealing to scientists details of the magnetic field itself.

SOHO is now the greatest comet hunter of all time, and – since comets are named for their discoverers – its comets all carry the name SOHO. The 3000th comet discovered was named SOHO-3000.

Like so many others discovered by the spacecraft, it was destroyed by its plunge near the sun.

Watch the video to learn more! 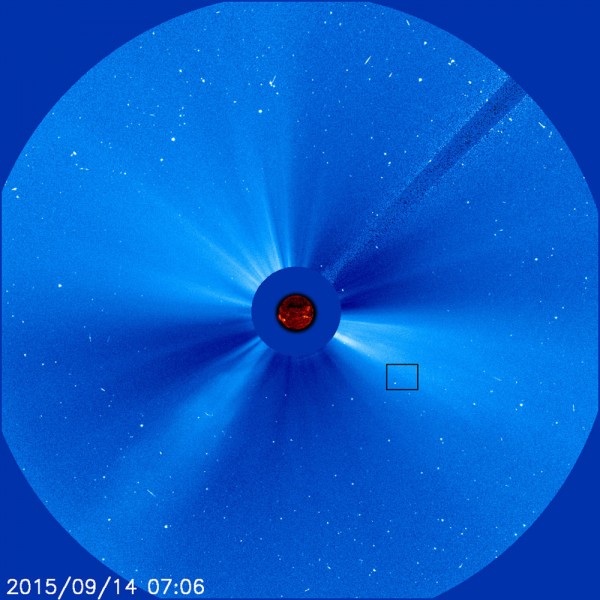 Bottom line: SOHO – Solar and Heliospheric Observatory – found its 3000th comet on September 14, 2015. The spacecraft is now the greatest comet-discoverer of all time, but nearly all of its comets are sungrazers and didn’t survive their passage near our local star.